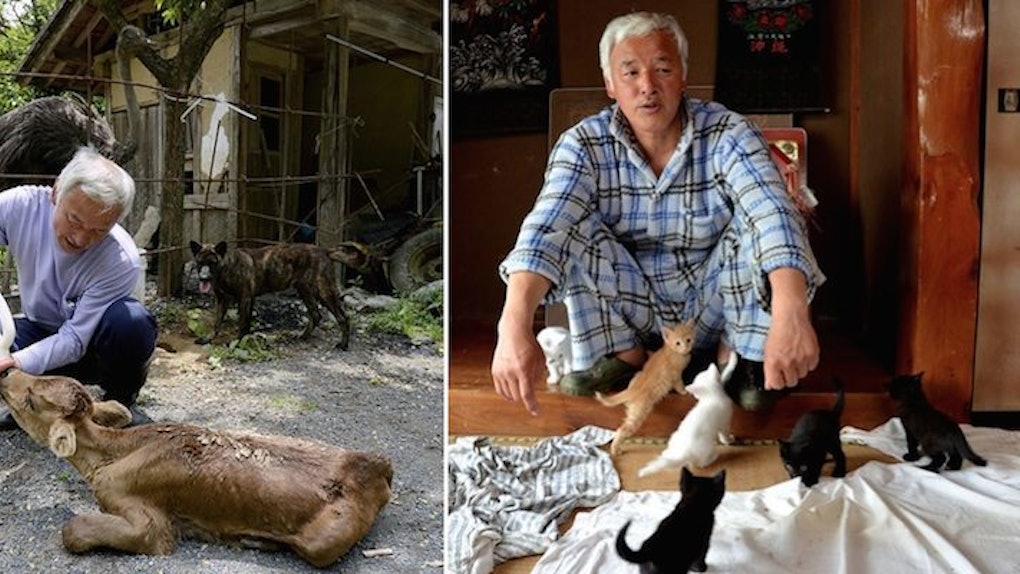 In 2011, a devasting earthquake and tsunami struck Japan. After radiation started leaking from the Fukushima Daiichi Nuclear Power Plant, residents in the surrounding areas fled for safety.

But, humans weren't the only ones affected by this horrible disaster. When these people abandoned their homes, they also left their animals to fend for themselves.

However, one man in Tomioka is determined to help these poor animals in need.

Known as the "Guardian Of Fukushima's Animals," this selfless 55-year-old returned to the radioactive area soon after the disaster and discovered his animals weren't the only ones left behind in the wake of the nuclear meltdown.

Despite the dangers of being exposed to extremely high levels of toxic radiation, Matsumura continues to live in his hometown, located a mere six miles from the power plant.

While we're not sure if Matsumura is extraordinarily brave or just extremely stubborn, there's no denying he is incredibly selfless and a hero to all of Fukushima's furry residents.

Take a look at the pictures below to see the incredible animal savior in Fukushima.

This is Naoto Matsumura.

When disaster struck in Japan, most people fled Fukushima and forgot about their animals.

However, Matsumura didn't forget about his furry friends and returned to the area after the initial nuclear meltdown.

When he returned to his hometown of Tomioka...

...he discovered his animals weren't the only ones abandoned during the disaster.

In fact, many people left their helpless dogs, cats and farm animals to fend for themselves.

He has made it his mission to help all of these animals in need.

Matsumura makes his way around the 12.5-mile radioactive exclusion zone...

...and gives much-needed food and water to all of the dogs, cats, pigs, cattle and even ostriches left behind.

Matsumura is the only person currently residing within the exclusion zone.

Despite knowing the dangers of this, Matsumura "refuses to worry about it."

However, he does take some precautions; he eats imported foods and drinks water that hasn't been tainted by radiation.

Taking care of the many animals living within Fukushima is a challenging task...

...especially since Matsumura doesn't receive any funding from the government to buy food his four-legged companions.

But, that doesn't stop this dedicated do-gooder from finding a way to save his furry friends.

Citations: The Radioactive Man Who Returned To Fukushima To Feed Animals That Everyone Else Left Behind (Bored Panda )