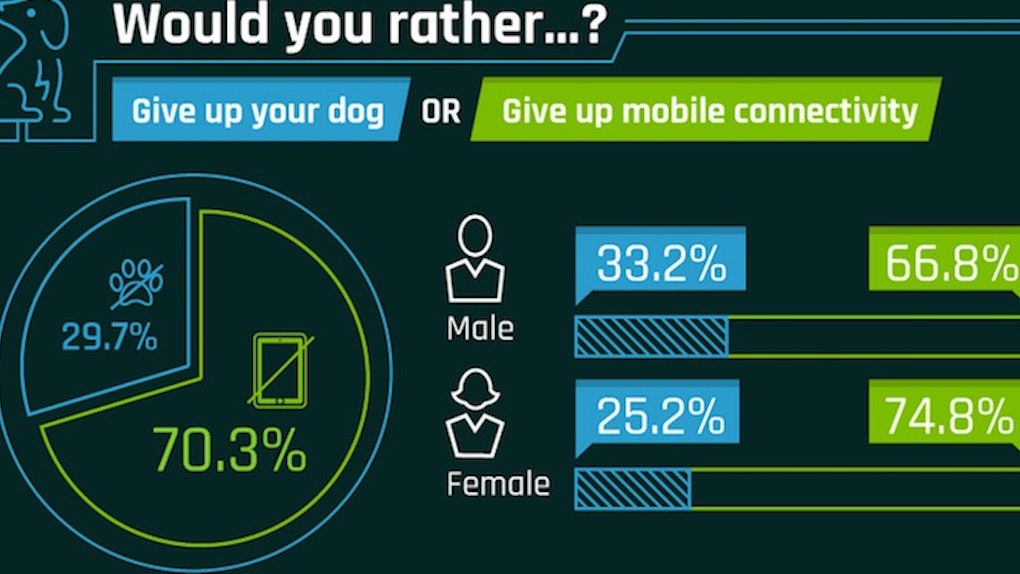 People Would Rather Have The Internet Than A Cure For Cancer, Study Says

The Internet has become a totally vital part of our daily lives.

It has connected the world, brought friends together, helped scientists work faster and made cat photos a regular part of our existence.

Sure, the Internet has done a lot of good, but is it turning us into utter and complete maniacs? According to this survey, yes.

In a new survey conducted by AT&T, the phone company asked 2,000 people in the United States using SurveyMonkey.com what they'd be willing to give up in order to keep technology running. The results are startling to say the least.

According to the company's findings, more than 40 percent of people would give up sight in one eye to keep the Internet.

Nearly 20 percent of people would give up on true love to ensure their Internet access continued.

The Internet insanity doesn't stop there.

Sure, a bunch of people will self-mutilate for the Internet, but would they actually harm another person to keep their connection up? You bet your ass they would.

More than 60 percent of men and 47 percent of women would NOT give up the Internet to save a stranger's life.

I repeat: A hell of a lot of people would not care if another human being died just so they could browse Facebook in their down time.

As the survey says,

Among the most willing to sacrifice the Web to save a stranger? Women, older people, and those who have been married at some point. On the other hand, men, younger people, and singles are least likely to give up the Internet to ensure a stranger's survival.

In the survey, more than 35 percent of people said they wouldn't trade the Internet for a cure for cancer.

More than 20 percent wouldn't give it up to end world hunger.

Almost 16 percent of people said they wouldn't give up the Internet in exchange for eternal life.

And, nearly 10 percent of participants said they would not give up the Internet to save a dying friend.

Oh, and it doesn't stop at people. More than 33 percent of men and 25 percent of women would give up their dogs for the Internet.

The technology dilemmas we posed sparked some very surprising results. Most people love the Internet more than they love chocolate – and almost a third of people love it so much they'd give up a finger to stay connected. Saving a human life is a higher priority, but still fewer than half of people would give up the Web to do so. People love mobile Internet too. Nearly 2 in 10 people would give up their significant other to stay connected on the go – and almost 3 in 10 would ditch their dog for their mobile connectivity.

Jesus. Humanity is dead. Science, please find another habitable planet soon so I can move to it as quickly as possible. Preferably, one with no WiFi connection.