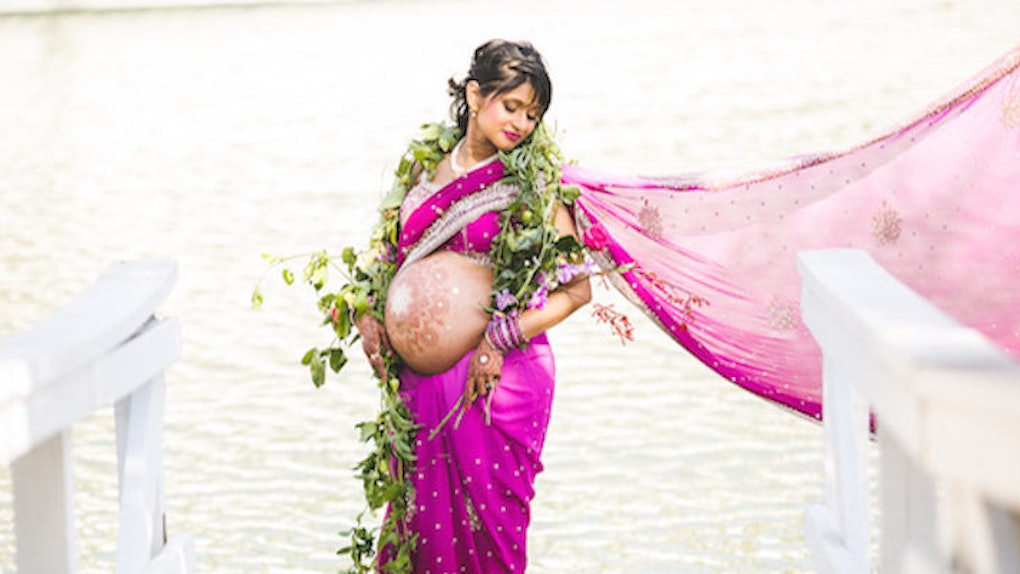 These Indian-Inspired Maternity Photos Are Nothing Short Of Gorgeous

When wedding blogger Preeti Moberg learned she was pregnant, she wanted to tell people her way: Through a celebratory blog post centered around an artistic, personalized maternity photoshoot.

As the co-founder of The Big Fat Indian Wedding, a blog that specializes in documenting (and providing inspiration for) traditional Indian wedding ceremonies, Preeti already had some idea of the direction she wanted the maternity shoot to go in.

In her blog post introducing the beautiful series, Preeti writes,

The mommy-to-be scoured Pinterest and Google for inspiration and rounded up a crew of talented women to help create her dream shoot.

After a ton of planning and prep, the group got to work, with photographer Shhivika Chauhan at the the helm of the project.

As you'll see below, the shoot turned out beautifully — more so, perhaps, than anyone could have imagined. Ladies: The bar has officially been raised.

Preeti says she "spent a lot of time on Pinterest and Google Images for inspiration" for the maternity shoot.

When she realized that there were very few photographs of pregnant Indian women to be found...

She realized that she wanted to make her culture the primary theme of the shoot.

A wedding blogger by trade, Preeti had dozens of professional contacts that she called on for help.

Preeti's husband even posed for several of the beautiful photographs.

The shoot was held at The Lighthouse at Glen Cove Marina in Vallejo, California...

Which proved the perfect setting for the shoot's exotic vibe.

Preeti looked nothing short of stunning, and the shoot turned out exactly as she'd hoped.

Read about the maternity shoot and see more of Shhivika Chauhan's gorgeous photographs at The Big Fat Indian Wedding.