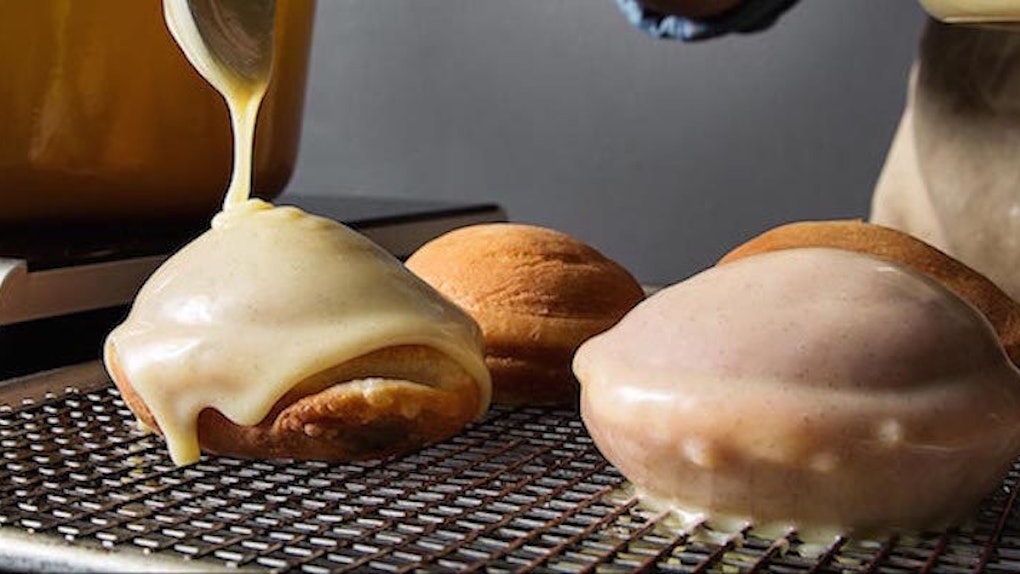 Here's How Those Famous Cinnamon Roll Doughnuts Are Made

Over the course of one week, the doughnuts -- which you can still get at NYC's Catch restaurant served with pumpkin ice cream, spiced rum Sabayon and cranberry pomegranate sauce — became an Internet sensation.

Silva was shocked by the attention. He said,

It's kind of crazy, I'm home not doing anything, and this came out of nowhere. I didn't push this dessert out, so the media attention happened organically.

If you can take two classic American pastries that everyone knows and loves, and come up with a way to combine them at a professional level, it's fun.

Rather than wrap an already-baked cinnamon roll inside raw doughnut dough, Silva mastered each pastry's recipe and his frying technique so the raw cinnamon roll bakes on the inside while the doughnut fries on the outside.

Cut into the treat horizontally, and the bun oozes warm cream cheese icing.

Check out the pictures below for a closer look at how this amazing dessert is made.

Chef Thiago Silva, formerly of Catch and other restaurants in New York City, developed this cinnamon roll-doughnut hybrid. Glazed with a cream cheese frosting, these doughnuts expose a full cinnamon roll when the top is removed.

The dough has a long mixing time to ensure proper gluten development. At the end of the process, cold butter is added to create a rich dough.

Chef Silva checks to see if the finished dough reached "window stage," when the dough can be stretched until translucent without tearing.

While the dough rests, brown sugar and cinnamon are cooked down with butter to make the cinnamon roll filling.

The dough is divided into thirds and rolled into two thin sheets -- one for the cinnamon rolls and the other for the layers of doughnuts.

The cinnamon-brown sugar mixture is spread evenly onto one sheet of dough before being trimmed and rolled tightly into a log.

The cinnamon roll log is cut into 12 half-inch discs to fit in the middle of the doughnuts.

One sheet of dough is laid out and topped with the cinnamon rolls before being enclosed within the final layer of dough.

Using the rounded top side of a 2¾-inch circle cutter, the doughnuts are sealed to push out any air around the cinnamon rolls before being cut with a 3-inch plain circle cutter.

After a final proof, the doughnuts are fried low and slow at 275 degrees Fahrenheit, so their inner cinnamon rolls cook through.

Finally, the doughnuts are glazed with a rich and tangy cream cheese frosting before being served.

Find the full recipe for these delicious doughnuts on Tasting Table.