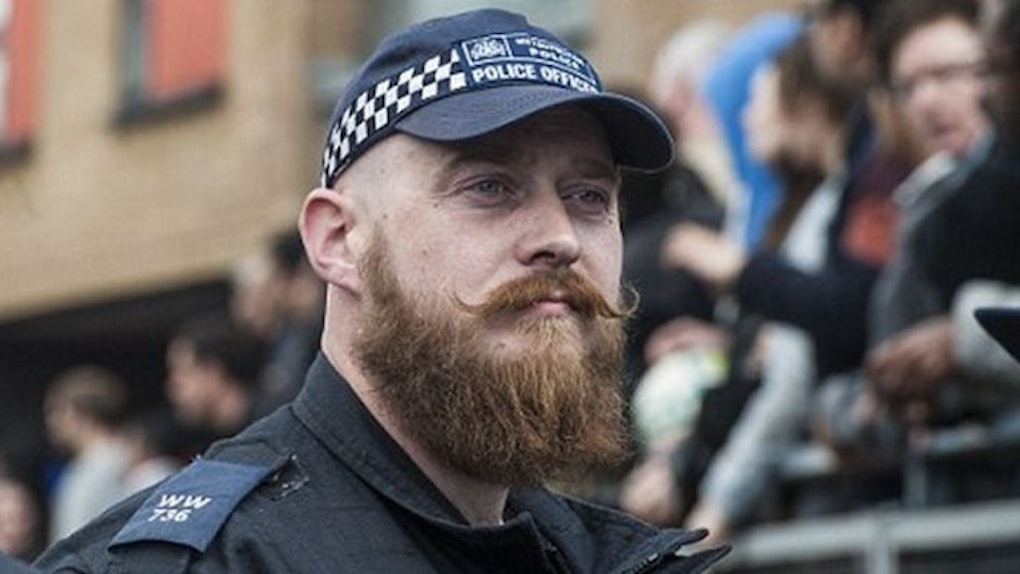 It seems like no one is safe from the hipster epidemic these days -- not even the police.

If you've been paying attention to social media news, you've probably heard about the bearded #HipsterCop. He quickly became an Internet sensation after someone tweeted a photo of the suave fellow during an English Defense League rally in London.

Since then, people created all sorts of hilarious memes and tweets poking fun at his pretentious appearance and comparing him to all sorts of hipster stereotypes.

But apparently, the "hipster cop" claims he isn't a hipster at all.

Over the weekend, the identity of this ultra cool cop was revealed, and the 6'4" officer named Peter Swinger is actually an ex-soldier who is married with three children.

Although his awesome beard and mustache make him look like the ultimate hipster officer of the law, this British bobby thinks he's a pretty normal guy.

He prefers to spend his free time reading fantasy novels, driving his motorbike and listening to Meatloaf rather than scoping out vintage shops, eating vegan and buying alternative records.

He can't help but find the whole thing very, very amusing. The entire family are getting massive laughs from it too, and he's been getting a lot of jip from his colleagues for it as well.

You may know this bearded man as the notorious "hipster cop."

He rose to fame after photojournalist Guy Smallman tweeted a photo of this stylish officer.

And within hours, he quickly became an Internet sensation.

People began posting all sorts of hilarious stereotypical jokes about him with the hashtag #HipsterCop.

But, don't let his impressive facial hair fool you.

This cool cop claims he isn't a real hipster.

In fact, Swinger is happily married with children.

And despite what the people of the Internet think, Swinger seems pretty mainstream.

He's not really into the whole alternative hipster lifestyle.

Rather than enforcing laws before they were written...

And keeping protestors at bay with organic pepper spray...

But hey, it's still funny to see all of the hilarious things people are tweeting about the #HipsterCop.

I bought my handcuffs in a San Jose fleamarket while trying to find some loose jasmin tea. #hipstercop pic.twitter.com/MqWvzXWcgu — Nick Pickles (@nickpickles) May 10, 2015

You may be cool but you'll never be as cool as the #hipstercop pic.twitter.com/zgkThHTIgi — James Cleverly (@JamesCleverly) May 10, 2015

Citations: Revealed: Hipster Cop Is Married 6ft 4in Ex-soldier Who Loves Motorbikes, Only Listens To Meatloaf And Claims He Is Definitely Not A Real Hipster (Daily Mail )