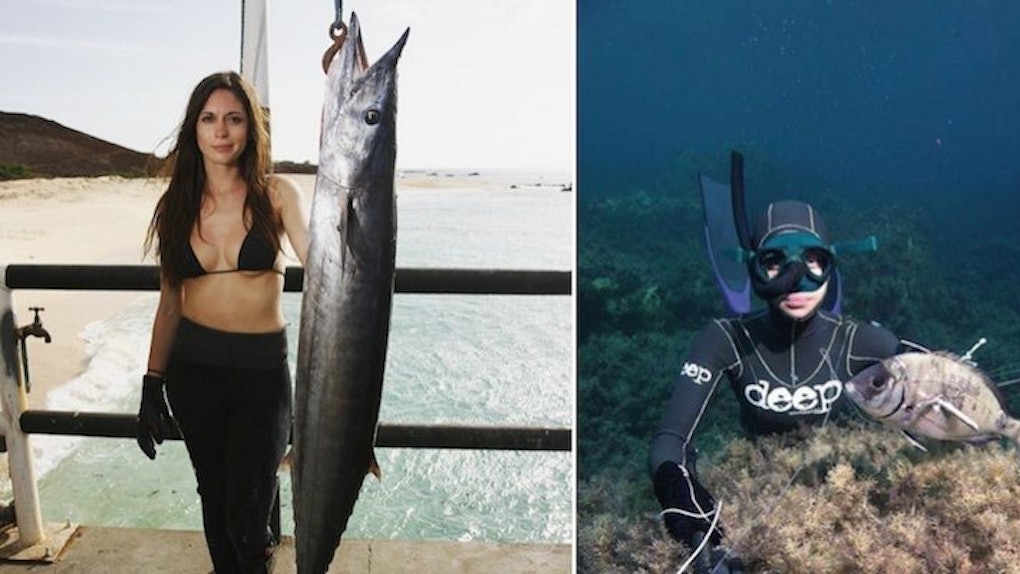 This Gorgeous Spearfisher Is Living Her Dream Despite The Backlash (Photos)

Have you ever thought about making one of the hobbies you're most passionate about your full-time job?

For this UK-based woman, the thought crosses her mind almost every day.

Meet Valentine Thomas, a 28-year-old woman who loves to spearfish.

In 2010, Thomas moved from Montreal to the UK. While she was there, a friend convinced her to take a diving course in Egypt.

Shortly after her experience, she ventured to Ascension Island for her first spearfishing trip and fell in love with the sport.

Despite not being able to make her passion her full-time job, she still managed to break a world record in spearfishing; in 2013, she set the record for capturing the largest Atlantic Jack.

Still, her accomplishments, although impressive, cause harsh feedback and criticism throughout her social media channels where she shares insights on her exotic lifestyle.

In a recent interview with Daily Mail, Thomas explained,

People get really angry, they get upset because they are not used to seeing where their food comes from. Everyone turns a blind eye to what they are eating, and I put the reality in front of them.

But Thomas insists people are angry for the wrong reasons. She said,

If you buy fish from a supermarket, why am I the bad guy? People see blood and they get squeamish.

What do you think? Is the huntress committing a crime or proving herself as one of the most inspirational women in the sport of spearfishing?

You be the judge!

The 28-year-old French Canadian is known for her one true passion: spearfishing.

She loves the sport, but she also catches a lot of heat on Instagram for hunting ocean life.

Thomas also endures a lot of sexist comments; she's one of the few women who take part in the sport.

Regardless, she continues to follow her passion whenever she isn't working her day job at a hedge fund in the UK.

Thomas' dad introduced her to diving and fishing as a child, but she didn't fall in love with spearfishing until she conquered her fear of the deep sea.

Now, her Instagram page is filled with adventurous moments captured during deep-sea excursions.

When she's not spearfishing or working, she likes to try something different, like traditional fishing...

...or simply exploring marine life off the coast of places like Greece and Barbados.

She makes it look so easy, you'd never know she had a near-death experience while shore diving as a teen.

Just like any other sport, spearfishing takes hard work, a ton of focus, dedication and practice.

Even after finding her passion, Thomas has goals she'd still like to accomplish...

So, what do you think?

Is Thomas' love for spearfishing a positive or a negative?

Citations: Glamorous Record Breaking Spearfishing Huntress Hits Back at the Abuse She Gets for Pursuing Her Dream (Daily Mail)