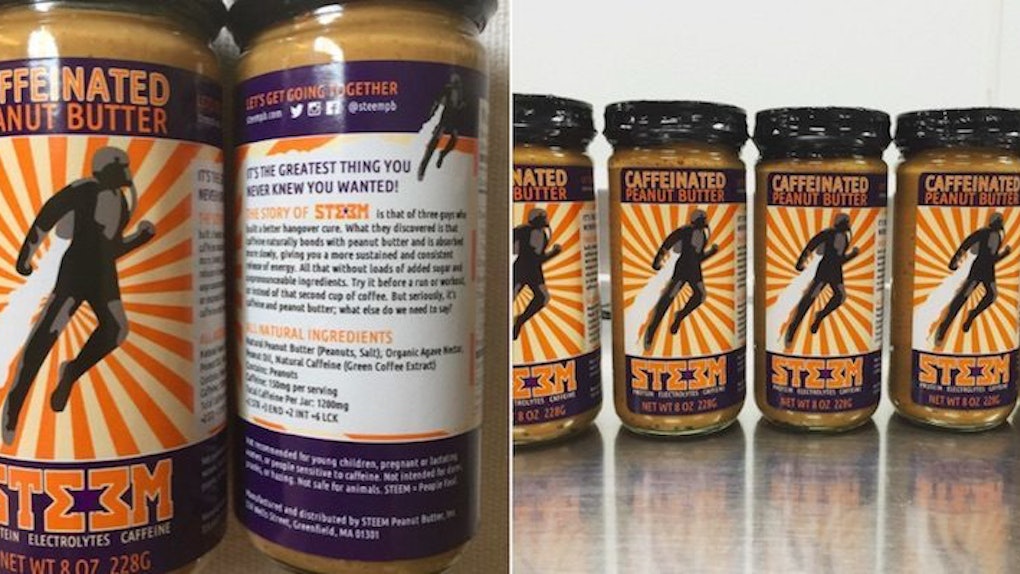 Caffeinated Peanut Butter Exists, And It's All You'll Ever Need In Life

If you're a coffee addict with a penchant for peanut butter, you might want to brace yourself.

All of your caffeine prayers were finally answered by the snack gods because Caffeinated Peanut Butter is now a real thing.

This is not a drill. I repeat: Caffeinated Peanut Butter exists, and it's probably the greatest invention of all time.

Massachusetts-based food company STEEM created the peanut butter, and one tablespoon of this scrumptious spread has just as much caffeine as an entire cup of coffee.

Because, let's face it, why would you want to drink your caffeine when you can eat it in the form of an epic snack?

If that's not convincing enough, you'll be glad to know STEEM peanut butter is also relatively healthy since it's made from all-natural ingredients and has no artificial sweeteners.

Trust me, this stuff will make you swear off boring decaf peanut butter for the rest of your life.

...and it's simply glorious.

That's right. You can now get a pick-me-up from your beloved peanutty spread.

One serving of this stuff (two tablespoons) has the same amount of caffeine as two cups of coffee.

So, you can get a buzz by scooping it straight out of the jar...

...or making all sorts of tempting caffeine-packed treats.

Seriously, why would you want to wait in line at Starbucks when you can just get a jolt from your PB&J?