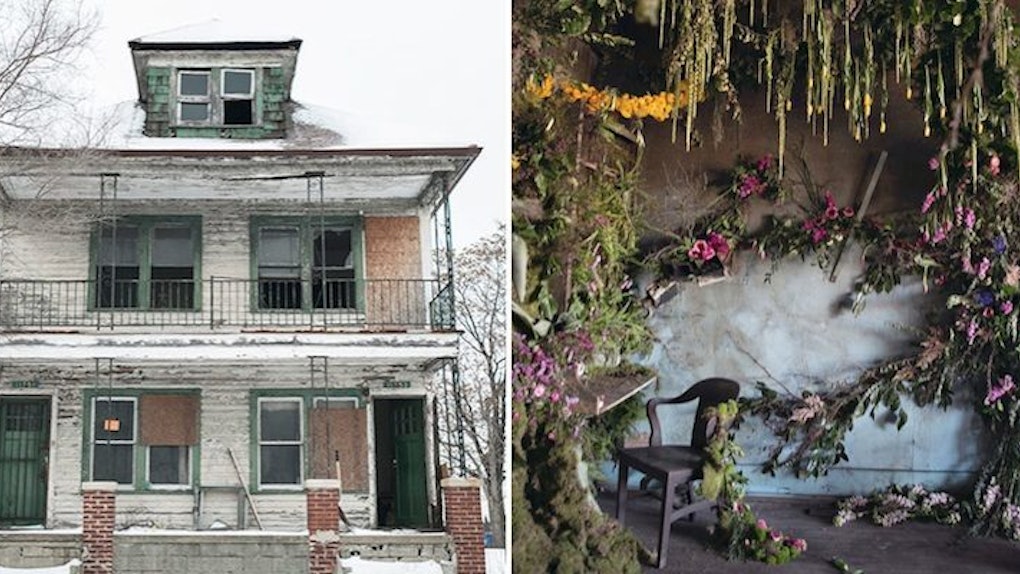 A person with even the most limited knowledge of the Motor City could tell you Detroit is known for is its abandoned neighborhoods.

For years, many of the homes in the residential areas once populated with people are now rundown and abandoned, leaving the neighborhoods with a ghost town-like feel.

These neighborhoods in Detroit are the epitome of urban decay due to a series of economic tragedies taking place in the city. From 1950 to 2013, the city's population fell from 1.9 million people to below 700,000.

Because of this decline, many homes were left abandoned.

Instead of continuing to let the houses act as eyesores to Detroit natives and fellow tourists, Lisa Waud is creating beautiful scenery.

According to Bored Panda, Waud purchased two properties in Detroit for $500 in 2014. She used one house as a canvas for her art project, Flower House, by filling it with thousands of flowers.

In addition, Waud created an Indiegogo account to crowdfund the Flower House project. Waud plans to fill an abandoned 16-room house with flowers as soon as October 2015.

Check out the photos below for a closer look at her work!

The city of Detroit has a reputation for being filled with urban decay.

Economic tragedies resulted in abandoned neighborhoods and a massive decline in population.

Lisa Waud, a woman who also owns pot & box, a floral design startup, is looking to make a positive out of a negative.

She filled one with thousands of flowers.

The project is called the Flower House.

Waud's goal is to reveal the city's true beauty with flowers.

But, Waud's objective doesn't stop there.

Overall, the Flower House project will be helpful in rebuilding the broken communities in Detroit.

Waud partnered with Reclaim Detroit, an organization geared toward using materials from Detroit's 78,000 vacant structures to rebuild the city.

Once Waud crowdfunds the project, she will then work with other florists to fill the properties with flowers.

Following the installation, the homes will be destroyed and the land will be used to open a flower farm and design center.

If there's anything to take away from Waud's efforts, it's that it only requires one person and an idea to help a community in need.

Whether you're using crowdfunding sites to raise money for a project or simply filling abandoned homes with beautiful flowers...

...the possibilities are endless!

Citations: Abandoned House In Detroit Brought Back To Life With 4000 Flowers (Bored Panda)