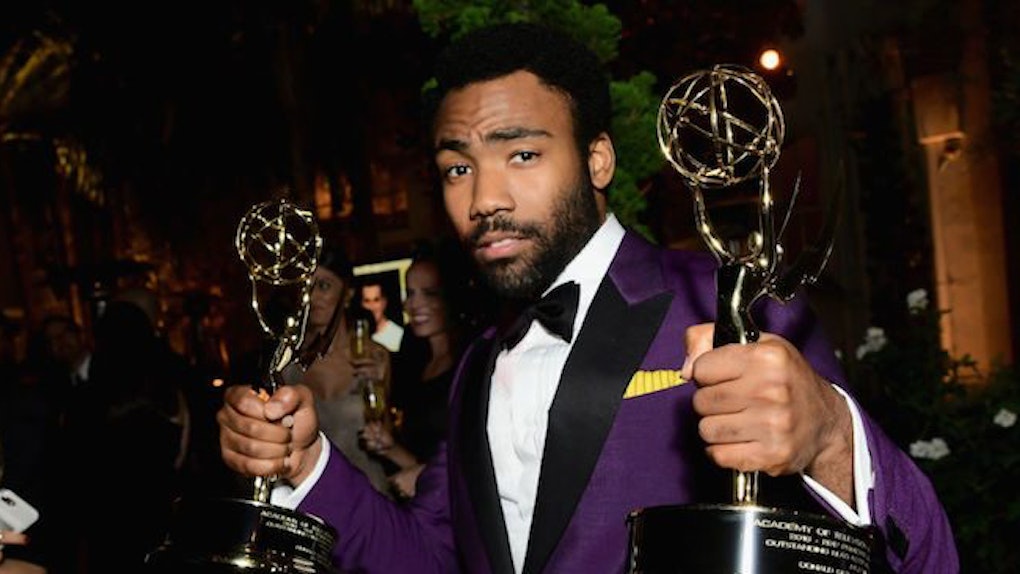 The 2017 Emmys Highlight Black Creativity, And There's More To Come

The wins of Donald Glover, Lena Waithe and Sterling K. Brown have not only broken barriers, but they have proven yet again that the stories of black people are important, valid and multi-faceted in their truth. The idea of #EmmysSoWhite is still very legitimate, but the 2017 Emmys highlighted black creativity in a way we haven't seen another awards show do. Last night's victories of the first African-American woman for Oustanding Writing In A Comedy Series and the first African-American man for Outstanding Directing In A Comedy Series give aspiring black and brown writers, directors and actors the hope to keep pushing forward and dreaming big.

As an avid writer and television watcher, I've always appreciated the value of a great story being told. Growing up, I'd rarely see accurate depictions of myself or people in my community portrayed on the television screen. Sure, there were full casts of talented African-American actors on shows like The Fresh Prince of Bel-Air, My Wife and Kids, and Family Matters, where the characters encountered situations that highlighted what it was like to be black in America through a comedic lens. But in some respects, those examples were white-washed and deemed "cookie-cutter safe" for network television by, what I assume to be, predominantly white male executives.

Thankfully, we now live in a time where black people are doing more than just acting; we are directing, executive producing, and creating unique platforms to tell stories that are authentic and relatable. We're picking up from where the trailblazers before us have left off and developing honest plot lines that align with our present journey as a people. Our stories are no longer being singled out as the only "funny" black family in white suburbia or the troubled young person overcoming obstacles of a life growing up in the 'hood. We're uncovering narratives that are sometimes messy and unpredictable, but more often than not, very normal.

In FX's Atlanta, Donald Glover's unique perspective as an actor, director and musician adequately shows the world one of the most coveted 'hoods known to black America. Atlanta, Georgia isn't just home to The Real Housewives, but it is one of the capital's of southern hip-hop. What makes Atlanta great is that it provides viewers with an everyday glimpse into the life of someone who is not only trying to make it out of the 'hood, but do well by his family in the process. It defines a culture of strip clubs, shoot-outs, and lemon pepper wet chicken wings that is often glamorized in rap lyrics but is in fact, real life.

In his acceptance speech for Best Lead Actor, Glover thanked his partner, his children, the city of Atlanta and surprisingly, Donald Trump. "I want to thank Trump for making black people number one on the most oppressed list," Glover joked. "He's the reason I'm probably up here."

Lena Waithe's impeccable writing and acting in Master of None's "Thanksgiving" episode defines a turning point in a black mother-daugther relationship. In the scene where she reveals to her mother that she's a lesbian, her mother, played by Academy Award nominee Angela Bassett, expresses a concern that many black mothers have for their daughters. "I just...I don't want life to be hard for you," she says through tears. "It is hard enough being a black woman in this world, now you want to add something else to that."

In Waithe's heartwarming acceptance speech for Outstanding Writing In A Comedy Series, she thanked the LGBTQIA community, and gave an encouraging message. 'The things that make us different, those are our super powers," she said. "Every day when you walk out of the door, put on your imaginary cape and go out there and conquer the world because the world would not be as beautiful as it is if we weren't in it."

Sterling K. Brown's groundbreaking performance as Randall Pearson in NBC's This Is Us awarded him the Emmy for Outstanding Lead Actor In A Drama Series. It was the first win for an African-American actor in almost 20 years. What makes this role so heart-wrenching and dynamic is that we see Randall's unique evolution as a black man: fighting the demons of his past, reuniting with his dying birth father and raising a beautiful, loving family in the middle of white suburbia. Brown's incredible depiction of vulnerability and masculinity on-screen draws people in and serves as a mirror for many of the emotions and experiences of black men that aren't discussed as much within our community.

Although his speech got cut off by music (do better, Academy) he did have a chance to finish his remarks backstage while speaking to the press. "I never thought that this was a possibility," Brown said holding his trophy. "To be standing here 19 years after him [Andre Braugher], I want to represent. I don't want to be a flash in the pan or sort of, happy go lucky. I love what I do and this just feels real big."

We're in an era of black creativity that is unmatched and there is no longer need for apology or approval -- only room for more growth, more breakthroughs, and the need for more of our stories to be told. It is because of these and many other talented black actors, writers, and directors that black creatives like myself are more confident and relentless in the pursuit of telling our truth. To watch Lena walk upon on stage to receive her award as THE FIRST African-American woman in her category not only made me emotional, but it solidified the fact that black girls are indeed magical, and we have the right to lift our voices.

To watch Donald and Sterling thank their families and express the joy, love, and gratitude they have for them was incredibly endearing and provided a true illustration of the black family man. These images are not only powerful, but necessary for the continued manifestation of black success in Hollywood and beyond.

Our stories are honest, full of depth and emotion -- and it's about damn time that we're being acknowledged for being ourselves and telling our stories our way.