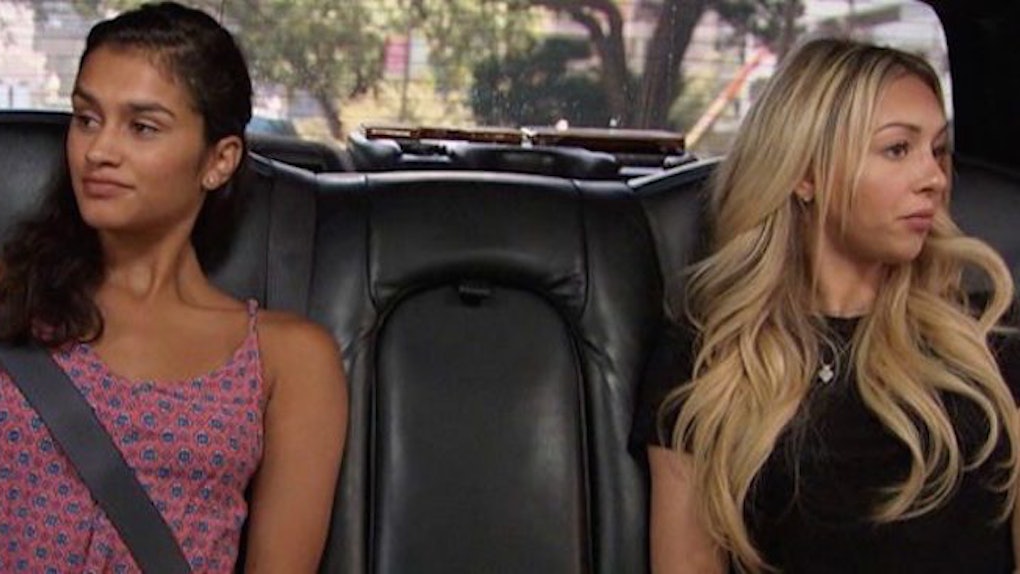 Bachelorette Feuds That Will Never Be Topped

When you google “Bachelorette Feuds” one of the first thing that comes up is an episode of Family Feud featuring former Bachelors and Bachelorettes.

It's an entertaining watch, but the feuding there is just for fun. Today we're gonna be taking a look at some feuds of a different breed. Just as entertaining as the game show version, but with some added nastiness, lying, and thinly-veiled threats of violence!

Such is life on the dreaded two-on-one date where feuding contestants are forced to third wheel each other for awkward, drama-packed Rendez-Vous.

On the current season of The Bachelorette, contestants (and enemies) Kenny and Lee were asked to accompany Rachel on a helicopter date. It did not go well. Lee, the villain, had been lying to Rachel for weeks about how aggressive and violent the sweet, fatherly Kenny was, and the two ended up yelling at each other while Rachel waited alone in a helicopter (bad move, guys).

Lee was sent home soon after, so the innocent Kenny did prevail, but you still kind of felt bad for the guy. Poor Kenny.

Corinne, Corinne, Corinne. She was the woman we all loved to hate on Nick's season of The Bachelor. All of her fellow contestants kind of hated her at one point or another, but Taylor was really singled out as her enemy.

They had a fight in Wisconsin and then (obviously) were forced to go on a two-on-one. There was voodoo involved. Taylor was left alone in the Baillou. Standard stuff, really.

We have got to talk about Chad. Chad had beef with everyone. He liked to call his cast mates things like "a bunch of butthurt dudes” and "a parade of losers.” Fellow contestant Alex was one of his most outspoken critics, so naturally, the two were paired for, you guessed it, a two-on-one!

Shawn and Nick had some pretty epic fights back when they were both contestants on The Bachelorette. It was mostly just Shawn being convinced Nick was an a-hole and Nick playing dumb about it. One of Shawn's main problems with Nick? His hunch that Nick had dubious intentions (fame, money, his own season of The Bachelor, perhaps...) and wasn't just there to find love.

These two made up though, after a somewhat random video plea from Shawn for him and Nick team up to fight prostate cancer. Nick said OK and even compared their newfound alliance to that of Rocky Balboa and Apollo Creed and Dr. Xavier and Magneto. Happy endings do exist.

This is another two-on-one date story. Not surprising. It was a windy day in the Badlands. The Season 19 enemies sat on opposite sides of the same king-sized bed set up in the middle of the desert and stared into the sunset for a full 38 seconds before talking to each other.

Do you know how crazy it is to have 38 seconds of dramatic silence on TV?

Kelsey accused Ashley of playing games. It doesn't really matter. The real highlights from their feud: Kelsey saying Ashley "has way too much makeup on to be genuine” and Ashley asking Kelsey, “You think I'm not as smart as you because I don't use big words?”

Michelle Money vs. Everyone

If you don't know who Michelle Money is, just know that the video of her Ellen interview is titled "Are The Bachelor contestants crazy?”

That's how crazy Michelle Money was.

Appearing on season 11 of the show, she made enemies with basically every other woman in the house. On the tell-all special, another contestant, Jackie, said to her face “I'm equating you to a spider. You're like creepy and everybody's afraid of you.” Later, another woman screamed “You're shitty” while Michelle was crying into Chris Harrison's arms. Cold.