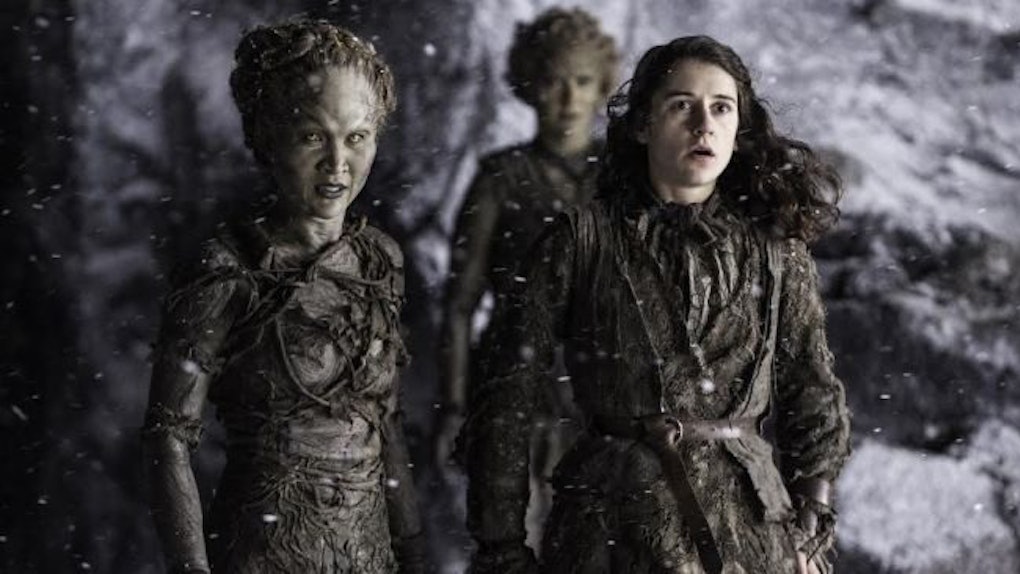 Who Are The Children On 'Game Of Thrones'? Refresh Your Memory ASAP

The history of Westeros is a long and strange one. George R.R. Martin has filled in quite a lot of backstory in his world-building in the A Song of Ice and Fire series. Game of Thrones has benefited from these detailed histories, not only in HBO's ability to work on not one, but five potential prequels when the show ends, but for the main show itself to dip into hundreds of years of detailed events when needed. One detail: The race known as The Children on Game of Thrones, or more properly, The Children of the Forest.

We've seen The Children on and off throughout the series, mostly in the adventures beyond the Wall. We met them properly in the Season 4 finale when Bran arrived at the weir wood tree, where the Three Eyed Raven resided. We got to learn a little bit more about them properly in Season 6, during scenes both inside that weir tree, as well as Bran's visions into the past. (We also got to see them deploy a few magical grenades against the wights before succumbing to the sheer numbers.)

But who are The Children? Where did they come from? And why do they matter so much?

Who Are The Children?

The Children of the Forest have always been here. They were the very first peoples to settle Westeros, a non-human race who have been on this continent since before the Dawn Age. Their name for their race is "those who sing the song of earth" in what is known as "the True Tongue." They and the Giants shared this land for eons before the First Men ever set foot on Westeros. The only two places the Children did not populate: the Iron Islands, and Dorne, the latter of which they called "the empty land."

The Children's abilities include greenseeing and warging. They used obsidian both for tools and as weaponry. It is they who carved all the faces into weir trees, and created the concept known in the North as "the Old Gods."

During the close of the Dawn Age, the First Men came to Westeros, via a land bridge that stretches from Essos to Dorne. (Legend says they were led by Garth Greenhand, who would eventually become King of the Reach.)

While the two races attempted to live peaceably, their differing ways of life soon came into conflict. The First Men chopped down trees for fire, for housing, for fuel. Realizing the Children somehow communicated via weir woods, they became paranoid and burned their forests. Soon they were at war.

The War Against The First Men

The fight between the Children and the First Men lasted thousands of years. There are legends of battles, including one where Brandon of the Bloody Blade slew hundreds of Children in a terrible battle. In retaliation, the Children destroyed the land bridge between Essos and Dorne hoping to stop the invasion. And, as we learned from Bran's vision, they created the White Walkers to fight for them in battle.

Some of the First Men began to side with the Children eventually, including those who would become to crannogmen (Meera and Jojen's people) and intermarried, creating men with greenseer abilities.

The Isle of Faces

Eventually, the War came to a stalemate, and ended in a truce, nearly two thousand years after the First Men arrived. While the show has chosen not to show it, there is an Island, called "The Isle of Faces" where the last major planting of weir wood trees is, all of which bear faces, to witness the pact that signaled the end of hostilities. It is considered the most peaceful place in Westeros, and people journey there for spiritual cleansing.

The Children were granted rights to lands in central Westeros, while the First Men settled in the North and to the south. They took up the Children's religion as well, honoring weir woods, and following the Old Gods.

The Children and the First Men teamed up together twice more after their pact. The first time was when the Long Night came, and the White Walkers came down from the Lands of Always Winter. As we know the Children were responsible for their creation, only to stop needing them after the War ended, and losing track of them. Together, led by Azor Ahai, the Children and the First Men defeated the the Armies of the Dead. The Children are responsible for the magic that went into the building of the Wall by Bran Stark the Builder after it ended.

The Withdrawal Beyond The Wall

The withdrawal started when the Wall was built. Both the Giants and the Children began to retreat from the southerly lands, north of the towering structure, and away from mankind. Still a few stayed south, with Children helping build Storm's End castle and working with the Night's Watch. It is said they mined obsidian glass and gave a hundred weapons made from it as gifts to Night's Watch every year for centuries.

Then the Andals came. Those Children who had not abandoned the Riverlands and central Westeros attempted to fight, but the Andal's iron weapons they brought took them down all too easy.

The Children, The Myth, The Legend

Since the Andals invasion, the Children have quietly disappeared from Westeros altogether, living only above the Wall, as have the Giants. To most of Westeros today, these are creatures only of myths and legends, who might not even have ever existed as far as is known. The Targaryens never even knew they existed. Just stories that Old Nan tells Bran as he goes to sleep....

But we know better now, don't we?