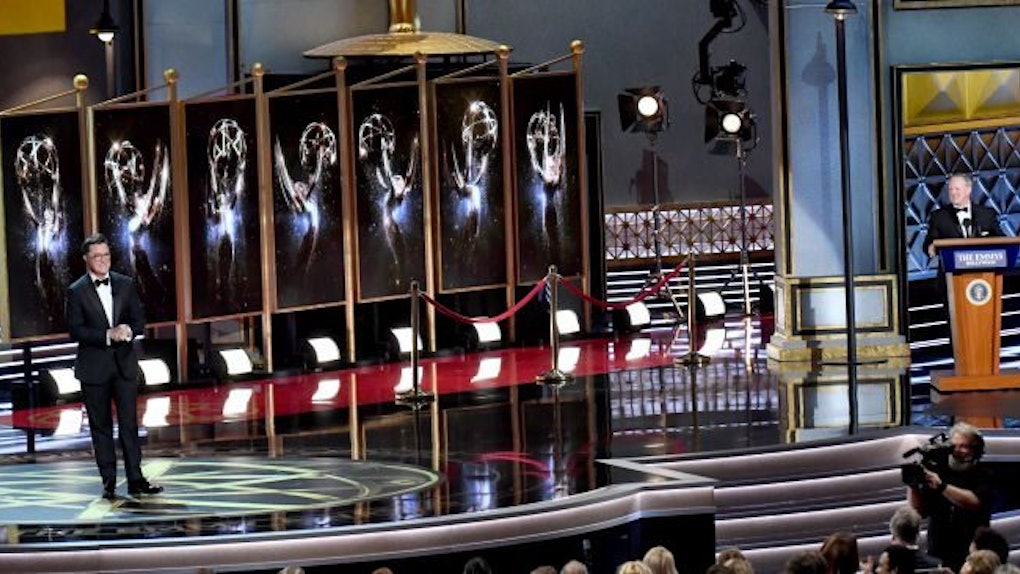 The Emmy Awards 2017 have been a smash for Stephen Colbert so far. His opening monologue was one of the best in recent memory, and his jokes have been on point the whole way through. But nothing prepared us for the amazing Emmys Westworld sketch that came out of nowhere when Colbert suddenly started "glitching" on stage when we came back from commercial break. Well, perhaps not out of nowhere. Westworld is one of the most heavily nominated and favored shows this evening in the Drama category, so perhaps we should have expected a tribute to it along the way.

What I'm sure no one was expecting though, was the nudity.

Well as is the way of the show when the (female) hosts in Westworld are pulled out of service for glitching and Bernard Lowe (played by the esteemed Jeffery Wright) reprograms them, or runs diagnostics and so forth, they're naked. That's not surprising, this is HBO, and female nudity is so gracious in some shows, they named a term after it: "Sexposition." But I'm not sure anyone in the audience registered that meant Colbert would be totally naked during his diagnostic run.

The screams in the audience when they hit this shot were audible.

As for Twitter, they were more impressed by Colbert's stand in abs. (A running gag on his show.)

And also, women loved it.

I did too. Not only for the nudity either. But for the jokes, which were, like his monologue, absolutely on point.

For those who might be a little tired of the politics, Bernard Lowe has a cure for that. Once he ran Colbert's diagnostics, he decided to dial down the political jokes. Not by much, but enough.

Considering that the next award then went to Alec Baldwin for his portrayal of Trump on SNL, I suppose there's only so much dialing down Colbert himself can do, but kudos for the show acknowledging how political they were in the first hour — a big change from previous years. (For the record, the nerve to go political is why Colbert's opening monologue was such a hit. Big risks equal big rewards.)

HBO was clearly flattered. Without Game of Thrones nominated this evening (they weren't eligible), Westworld is their big nominations scorer, stepping up to the GoT plate by taking 22 nominations all by itself for that fabulous breakout first season last November. Westworld also came in tonight having won five Emmys last weekend, so it was a good bet on the production's part that a sketch poking fun at it would be a big hit with audiences.

Perhaps this will make up for the opening monologue pointedly calling them out for bringing back The Confederacy? Stay woke indeed, HBO. Somehow I think there is an entire hashtag on twitter (#NoConfederate) that wishes you would.

Westworld, for the record, may be the frontrunner coming into tonight, but they did not win the Supporting Actor nomination for Wright just prior to this sketch. He lost to John Lithgow as Winston Churchill on The Crown. Westworld is expected to have a good chance to win for Supporting Actress with Thandie Newton as Maeve Millay, but that's still to come.