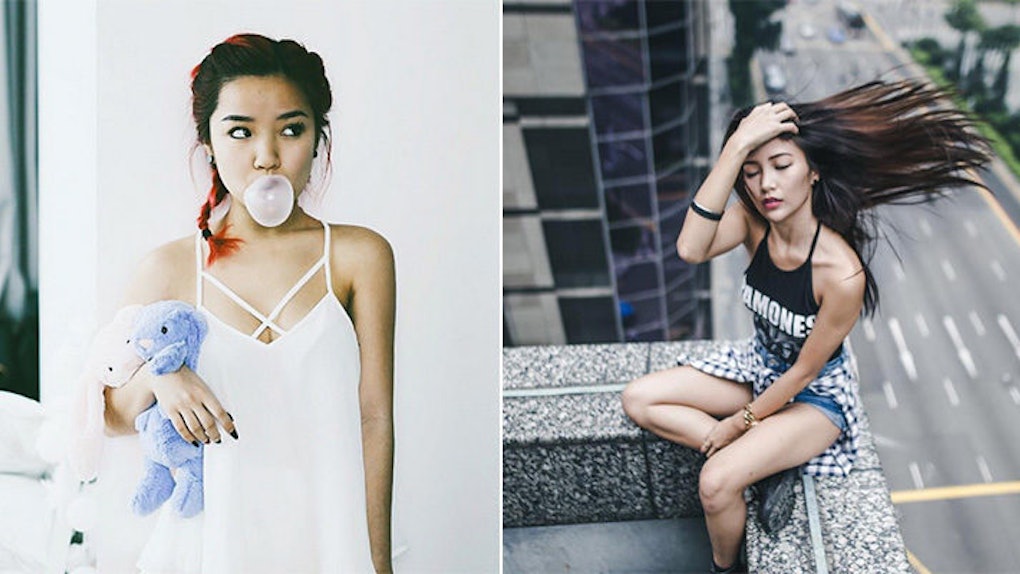 The cyber world has become pretty interesting ever since social media took over the Internet.

You find all kinds of people on social media: some we hate, some we adore and all of which, we stalk.

Yup, we're talking about the 12 different types of Singaporean girls on social media:

Most commonly seen on Instagram, the fashionista has her Instagram grid filled with pictures of her in hundreds of different outfits, one for every day of the year.

Poses often include touching their hair, looking down on the ground or um, crossing the road.

Though not professional models, some of these girls are undeniably gorgeous, and they become an actual fashion inspiration to many, gaining themselves a strong following on social media.

However, actual fashionistas or not, you can't deny that you're envious of all the clothes they seem to possess. Sometimes, you can't help but wonder, "How come they don't seem to re-wear anything?"

Her favorite line is probably, "But first, let me take a selfie."

This is the girl who floods your social media feed with shots of -- you guessed it -- herself.

She often posts a multitude of similar photos in different angles of her all dolled up.

In some cases, photos are strategically angled from high-above, giving the wolves of cyberworld the "best view" of her cleavage.

It's simple; girls hate them, guys love them.

This is pretty self-explanatory.

She's the one who always seems to be engulfed in heated keyboard fights on social media; she's the ambassador of indirect tweets and status updates.

She's a drama magnet, and even if she doesn't go looking for drama, somehow it always seems to find her.

Take online celebrity Naomi Neo for example. She has been very vocal and expressive with her thoughts, often penning it down on her personal blog, without holding back.

This has drawn her a fair share of fans and haters, but I guess that's the life of a drama queen.

With toned abs and a perky butt, this girl has a figure every girl dreams of.

A lot more girls are picking up fitness habits, and they're proud to share it on social media.

Their posts often include mirror selfies in the gym, yoga poses with her fitted sports get up on or pictures of her detoxifying juices and eat-clean diets.

We aspire to be like these girls, but deep down, we all know we wouldn't be able to commit to that boring eat-clean diet for long.

She'll go to every corner and every street in search of hipster cafés. She Instagrams every meal she has, giving mini “reviews” on her food blog, Facebook or Instagram.

Warning: Stay away from her accounts when you're hungry.

You hardly see her face on her profiles, as they're always bombarded with pictures of her kids.

She's also flooding your Facebook feed with status updates on her kids' milestones and achievements, and sometimes, she shares a little too much information ... like how her toddler just crapped all over his pants.

But then again, we simply can't help but join her in adoring her little rascals. After all, they are cute.

These are the girls whose Instagrams come alive when most of us are sound asleep.

Photos of them scantily dressed, dancing in clubs and basically raving the night away as they get alcohol poured into their mouths, are plastered all over their social media.

These are the girls who know how to have a good time and aren't afraid to show it.

People who say Singapore has no talent obviously hasn't been on social media enough to discover girls like Hashy Yusof and Estelle.Fly.

These ladies take pride in serenading us via their social media platforms with their melodic voices.

From 15-second covers on Instagram to full cover videos on YouTube, these are the girls we can't help falling in love with once they start singing.

This is the girl who's happily in love, and happy to show it to the rest of the world.

Her posts frequently proclaim her love and gratefulness for her partner, getting some people's hair standing, while making the rest of us go, “aww,” while wishing we had a relationship like hers.

Oh, and not to forget, her sweet essays usually end of with a hashtag created by fusing both of their names together.

For those of you who feed off other people's happiness and who believe in love, these girls make for great #relationshipgoals.

But if you're experiencing a bad breakup right now or a sour patch in your relationship, you might wanna steer clear -- at least for now.

They're the ones you receive a Facebook message from out of the blue asking, “Hey! How have you been?”

Before you know it, you realize where this is leading to.

These are the girls who use social media as a tool to sell their the insurance policies. First, they act nice and caring and ask for a meet up, before finally revealing their ulterior motives.

The worst part? It's always really difficult and awkward to reject their proposed “meet ups” because of the so-called friendship that's there.

They are also frequently posting updates on why you should be insured, or the various properties available. You'll know one when you come across one.

She's the complete opposite of the “so-in-love” girl.

Her social media is made up of depressing, emotionally unstable, self-pitying status updates, not to mention emotional quote retweets.

You'll often find her posting black and white selfies, captioned with something that goes like, “putting on a fake smile when my heart is crying.”

This girl probably just got out of a bad break up, so maybe give her some time, and all the depressing tweets will blow over.

Or alternatively, there's the unfollow button.

Lastly, there's the girl who has all the social media accounts, but you wonder what for.

There is zero activity on her social media, and you don't notice she's on your friend's list until three years later, by chance.

We don't know much about her because of her lack of activity on social media, but we assume she's probably using her accounts just to stalk other people's feed to stay "updated."

So there you have it: 12 types of Singaporean girls on social media.

Let us know if we left any out.