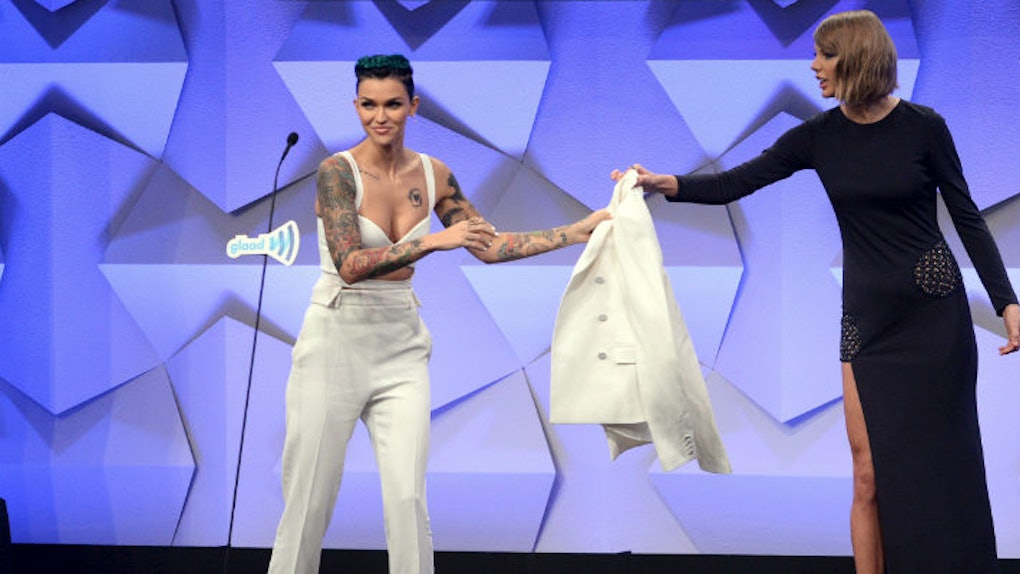 Ruby Rose Revealed How She Got Into Taylor Swift's Crew

Here's how you get into Taylor Swift's crew:

Blood in. Blood out.

Just kidding! That would be way too much... but maybe... No, no. Swift would never allow that.

What young, kind of successful, kind of beautiful woman doesn't want to be part of Swift's squad? But how do we get there?

Finally, we have an inside source giving us the lowdown.

Ruby Rose was a guest on KISS FM's "Kyle and Jackie O Show," and she revealed all. Kyle Sandilands asked Rose if there is any type of membership card or t-shirt when you join the squad.

The model and actress responded,

Yeah, you get this whole hazing thing and you have to do initiation. It was pretty intense... you name it, I had to do it to be in Tay's squad.

Already, I was pumped to hear more about Swift's terrible hazing. Sadly, Rose was just kidding. She added,

No, I don't know. I don't think she even calls it that… It's just a normal friendship.

Don't ruin this for me, Ruby!

But what is a normal friendship? My friends are ride or die. I test all of them by staging an elaborate bank heist where it looks like I am shot in the leg just as the cops arrive.

Do they leave me behind and make off with the loot? Or do they carry me to safety, risking their own life in prison?

Ruby Rose went on to say,

She's just an amazing friend and an amazingly supportive one at that and I feel very, very thankful for having her in my life.

So while Rose doesn't really offer any tips on how to get into the squad, here's what I've been able to analyze from some photos.

You have to be ridiculously good looking, talented, crazy-tall or not be Hope Schreiber, apparently.

Citations: Ruby Rose Explains What You Have to Do to Be in Taylor Swift's Squad (Teen Vogue)