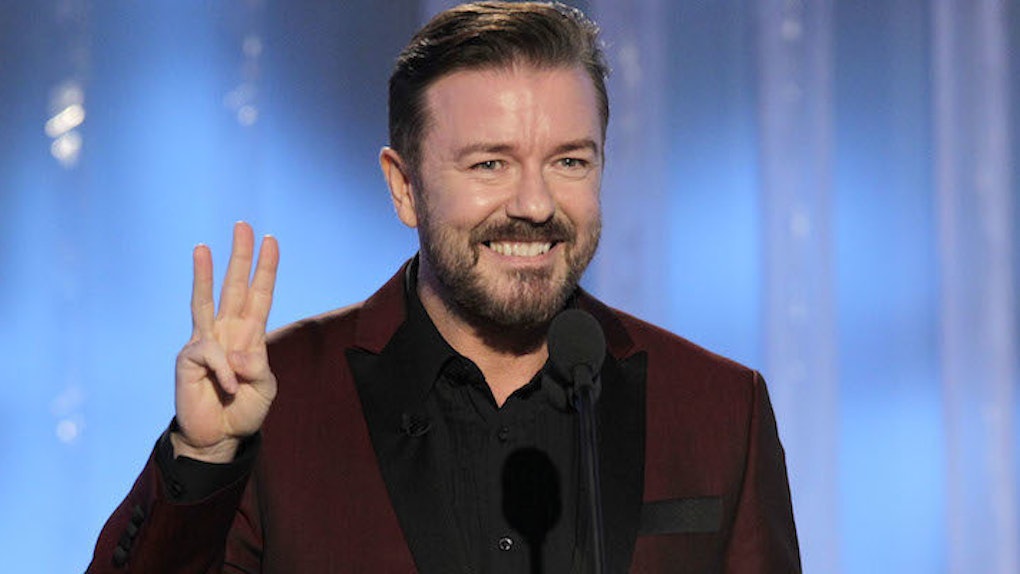 Ricky Gervais is a comedic powerhouse.

He has created hit shows such as "The Office," "Extras," "Derek" and the docuseries "An Idiot Abroad."

His standup has garnered two HBO specials and sells out around the world. (So worth every penny, I can assure you.)

He’s been in movies, he’s huge on Twitter and he even has a massive podcast with Stephen Merchant.

He's done so much, but one of his greatest accomplishments to this date was his three year stint as the host of the Golden Globes.

Ricky made a splash in his first year, throwing comedic elbows and uppercuts to the shiniest stars in Tinseltown.

He was praised for his lack of fear and his ability to see how silly all of that grandeur can sometimes be.

In his second year, people thought he hit below the belt a few too many times, so it wasn't as successful as his first. They were astonished to hear he would be back for a third and final time.

In that year, Ricky threw all caution out the window and said whatever came to his mind.

In the interviews that followed, he made it clear that they weren’t going to ask him back, so why wouldn’t he take the opportunity?

Color me 32 shades of astonished when I discovered that after three beautiful years with the dynamic duo of Fey and Poehler, Ricky would be back at the helm.

Not that I didn’t love the idea.

I am a massive Ricky Gervais fan.

I’m a major fan of his standup; I'm unable to turn it off when I catch it on HBO, and I nearly stopped breathing when I saw him live from laughing so hard.

I also watch certain episodes of "Extras" when I’m feeling down because Ricky took the idea of certain actors and actresses and took them to the extreme.

Remember Orlando Bloom obsessing over being the hottest guy and “celebrity you’d most want to snog?"

But I was shocked to hear he was back, since it was such a huge ordeal four years ago. He was too brash, too brazen. He doled out unnecessarily low blows.

He didn’t take the job seriously enough and was out to ridicule everyone in the room in the harshest way possible. Article after article from around the globe stated this and the Hollywood Foreign Press Association seemed done with him.

Is it about ratings? Ratings were down for last year’s broadcast, so perhaps they were assuming that bringing back a wild card host would jack the ratings back up.

Is it about publicity? Do they want to be seen as the better broadcast over something like the Oscars or the almost-not-hosted-at-all Grammys?

What is it about Ricky Gervais that had them knocking at his door with champagne and chocolates?

It’s fairly simple: Ricky Gervais understands not only comedy, but he understands Hollywood.

He understands that there are plenty of us out there who love the award shows, but sometimes wonder how celebrities allow their egos to get that big.

He understands that if you have something to say, there’s no better time than right now to say it.

He’s not saying some of these jokes to be malicious; he’s saying them because he feels people need to understand that they’re not god’s gift to the world.

He understands the politics of the industry and wants to point them out. There’s no illusion when you’re listening to him speak. What he says is what he feels and it’s refreshing in a time when everyone seems to feel so put together all of the time.

It’s why we love Jennifer Lawrence or Amy Schumer.

They’re not afraid to unapologetically be themselves. They want you to know that what comes out of their mouths isn’t dictated by someone whispering in their ear or writing it down on a scrap of paper.

Gervais is in no way coy about his meaning.

It’s there and its delivery is so flawless and spot on that you can’t help but laugh. On top of that, his laugh is so absolutely ridiculous that it permeates the room causing everyone else to laugh with him, too.

He just has the power to make a room that is looking for praise feel uncomfortable. How could you not respect that? He reminds them that they can’t take all of it so seriously.

Plus, he drinks the whole time, so by the end, you know you’ll get some golden sound bites for the next news day.

Three cheers to you, Mr. Gervais.

You’re one of the funniest men out there right now, and you’re unapologetic AF about it.

I can’t wait to see what you’ve got to say this year.