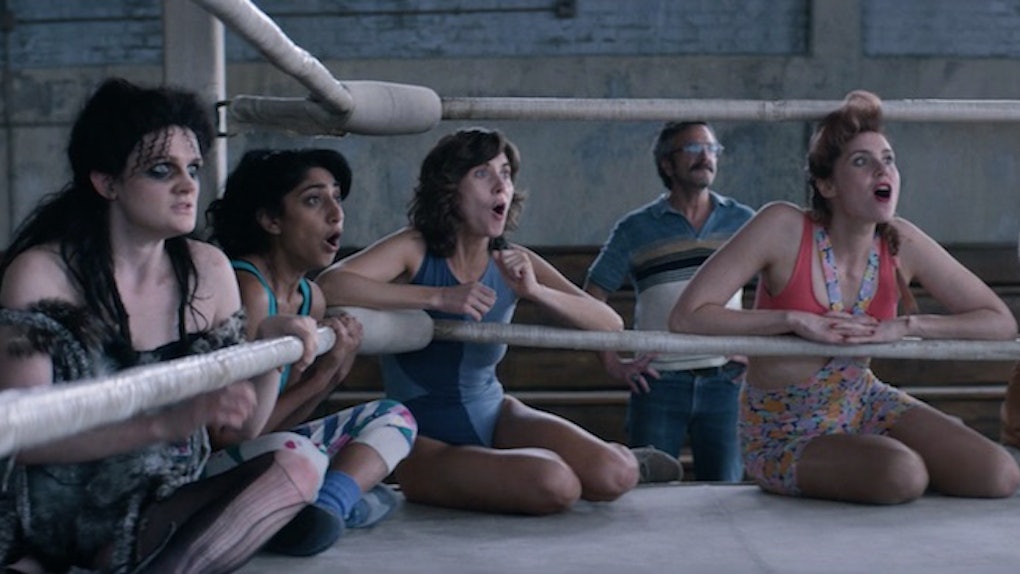 The Real 'GLOW' History: About Gorgeous Ladies Of Wrestling

As you watch Alison Brie and Betty Gilpin put each other in headlocks in this show this weekend, you might be wondering to yourself, "Did this all really happen?"

The answer to that question is both yes and no. Yes, in the sense that a women's wrestling program called the Gorgeous Ladies of Wrestling (GLOW for short) really did exist in the '80s.

No, in that sense that the characters and storyline in Netflix's GLOW are fictional. Ruth Wilder (Brie), Debbie Eagan (Gilpin), and Sam Sylvia (Maron) were never real people, and the drama between the characters is all fabricated.

But show runners Liz Flahive and Carly Mensch, alongside Orange Is the New Black creator Jenji Kohan as an executive producer, clearly drew a lot of inspiration from the original GLOW.

So here's a few things about it you should know about the real-life GLOW before you start your binge-watch.

It was produced in Las Vegas and featured staged wrestling matches between women, most of whom were actresses and models with no prior experience in wrestling.

2. The show was created by film director and screenwriter Matt Cimber, who likely inspired Maron's character.

One former GLOW star recalled that Guerrero felt the women weren't taking the show seriously on the first day of training, and so put a woman in a headlock and made her cry. Perhaps this is why the Netflix GLOW only had their trainer, "Salty the Sack Johnson," around for the first episode.

4. Each GLOW performer had their own rap song about their wrestling personas that opened the show.

The characters are just as offensive and stereotypical as the Netflix version makes them out to be, if not more. Though there's no rap in the Netflix show (yet), the writers do allude to the tradition in Episode 3, when each of the girls records their own video promo.

5. There was a documentary called GLOW: The Story of the Gorgeous Ladies of Wrestling made in 2012.

The film was directed by Brett Whitcomb and written by Bradford Thomason, and features many interviews with the original GLOW wrestlers. The film helped inspire show runner Liz Flahive to create the new Netflix series. You can, perhaps not so coincidentally, find this documentary on Netflix.

6. There's an official GLOW website, where you can purchase DVDs and merchandise from the show.

For all you GLOW memorabilia collectors out there.

7. The original GLOW women still exist as a group today.

The original performers have both an official GLOW Facebook page and Twitter page, both of which they update regularly with pictures from GLOW then and now.