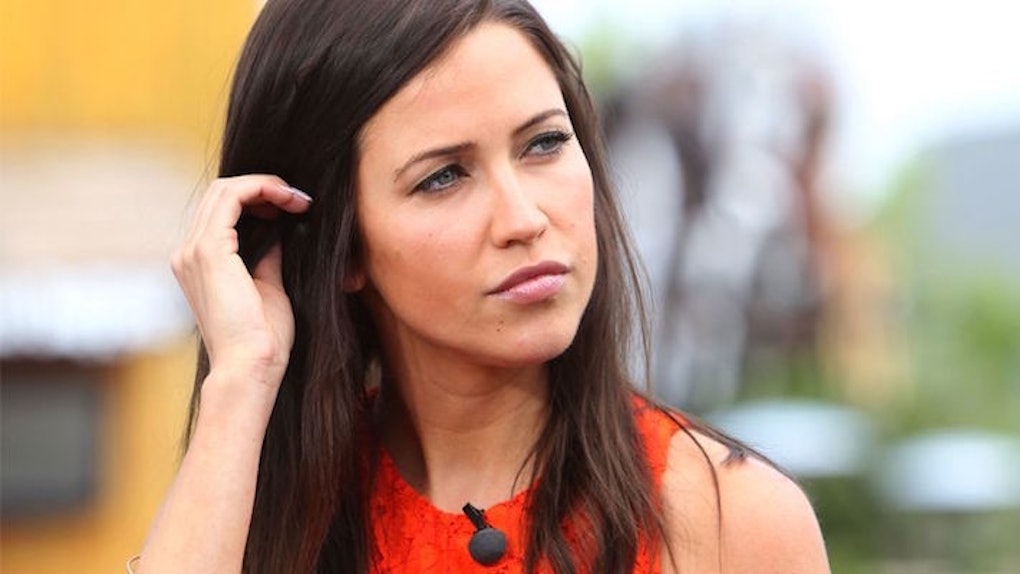 3 Reasons To Praise 'The Bachelorette' Instead Of Slut-Shaming Her

We all love reality TV for the same reason our generation lost the ability to date: our unrealistic expectations about love.

Which is why, when it comes to "The Bachelorette" series, even I can't hide the fact I wouldn't miss a single episode.

Maybe it's because we secretly adore love triangles -- or fifteen-angles. (I stopped counting the men on the show after a while.)

Maybe it's because no one could withstand not watching former "Bachelor" Juan Pablo's Venezuelan accent.

Either way, if we can't find love ourselves, we may as well embark on another person's journey on finding love.

And I was more than excited I could watch and follow this series' bachelorette, Kaitlyn Bristowe.

You've more than likely watched her let her guard down as she fought to win over last bachelor's Chris Soules' heart, only to have it shattered into a million pieces (I told you, I like drama.) in the process.

If it makes you feel any better, the former "Bachelor" Chris and his fiancée Whitney didn't live happily ever after in the end.

We watched Kaitlyn crack jokes in the most awkward situations, making everyone around her laugh, as well as the millions of viewers at home.

But most importantly, we watched her be herself in a house full of drama.

For those who have been following the show, you have probably all been tempted to call out the "Bachelorette" for her recent actions. Hint: She slept with someone.

I, for one, couldn't help but praise her.

In a time when judging others has become as common as ordering pizza, not giving a f*ck what anyone thinks of you has become far more difficult, if not impossible.

So it came as no surprise that the new "Bachelorette" is now being called a slut for trying to find a physical connection with a man.

Reality TV shows have become so immensely popular because we know in our subconscious minds they're not real.

We all want to get swept off our feet by prince charming and have romantic dates that include a helicopter flying over New York City at midnight.

But, when we even see a glimpse of reality in these "reality" TV shows, we start jumping to conclusions and immediately chastise the people for acting like human beings.

Women have sex, and that's no statement that should be refrained from the world. If that wasn't the case, I can only assume a lot of men would end up extremely unhappy.

Kaitlyn Bristowe is just another woman, like you and me, trying to find love.

So before you start rolling your eyes, here are three reasons why calling Kaitlyn Bristowe a slut is just wrong:

1. Former "Bachelor" Juan Pablo couldn't even say "I love you" to the woman he chose; whereas, Kaitlyn is taking the process seriously

Juan Pablo may have been one of (if not the) hottest "Bachelor" on the show so far, but it became fairly obvious he had no intention of finding a wife.

"I love you" is three words and eight letters. You don't exactly need a good command of the English language to pronounce it.

Intimacy is an important part of a relationship, and could potentially be a dealbreaker if there's no physical connection. She's exploring every option to see their potential to grow.

Finding your husband in a group of 25 men may be fun, but what no one seems to realize is this is also extremely challenging.

After all, this is the person you're hoping to spend the rest of your life with.

2. She may be on national TV, but her love life remains entirely up to her.

"I'm sure there are plenty of people who have done the same during the show, but no one has talked about it this publicly before. We know it was brought up, but we don’t know the context," says Trista Sutter, who was also ABC's first bachelorette.

"Bottom line — as someone who has gone through it -- is that whatever Kaitlyn did on her journey is her business. I wish people would be more compassionate," she continues to say in US weekly.

Regardless of the fact that "The Bachelorette" is viewed by millions of people, it is Kaitlyn who has to spend the rest of her life with the person (that's the point of the show, right?).

So why does she needs to be coy about who she's sleeping with? It is her love life.

3. People will judge her no matter what, so she may as well follow her gut.

We all take advantage of laughing at the one in the spotlight. Every season, there is something we're not happy about.

We're quick to call out names, and we're not afraid of the consequences. We've become the critics of someone else's life while secretly wishing we could trade places.

While this series' "Bachelorette" Kaitlyn is well aware she is surrounded by cameras zooming in from all directions, she continues to follow her gut. Which is exactly the reason why she should be praised for courage instead of being called a slut.

Besides, who uses that term anymore?

As Kaitlyn already expressed,"I'm an acquired taste. If you don't like me, acquire some taste."

So, go ahead and shame her. But think about this before you do: What would you do in her position?