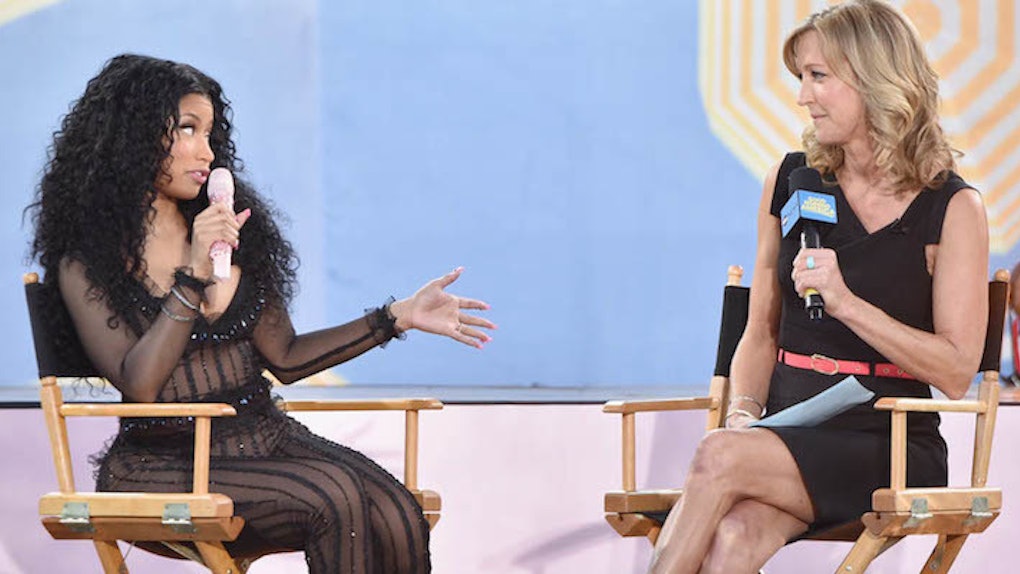 This morning, Nicki Minaj appeared on “Good Morning America,” but before the performance started, she sat down for an interview with the show's anchor, Lara Spencer.

In light of the Twitter feud between Nicki and Taylor Swift, there was a lot to talk about.

Nicki agreed with Spencer, who said, “[the] original intent may have gotten lost in the shuffle,” however, the two stars are “all good” now that they worked out their beef over the phone.

She was super, super sweet and she apologized. She said, 'You know, look, I didn't understand the big picture of what you were saying, but now I get it.'

Her Minajesty added she and TSwift “were cracking up laughing.”

It takes a big person to do what Taylor did.

Despite forgiving Taylor, Nicki still maintains the grounds for her argument.

She referred to a photo she posted on Instagram that presented statistics of artists who had previously been nominated for MTV's Best Music Video of the Year Award, saying,

There just seemed to be a little funny business going on.

'Anaconda' had such a huge cultural impact and on top of that we broke the Vevo record… therefore [it] should have been nominated.

She also argued against only “pop girls” being nominated, saying,

I think that we just have to have both images for girls. We can't have only have one type of body being glorified in the media because it just makes girls even more insecure than we already are.

Even though changes need to be made in the music industry, at least this story has a happy ending.