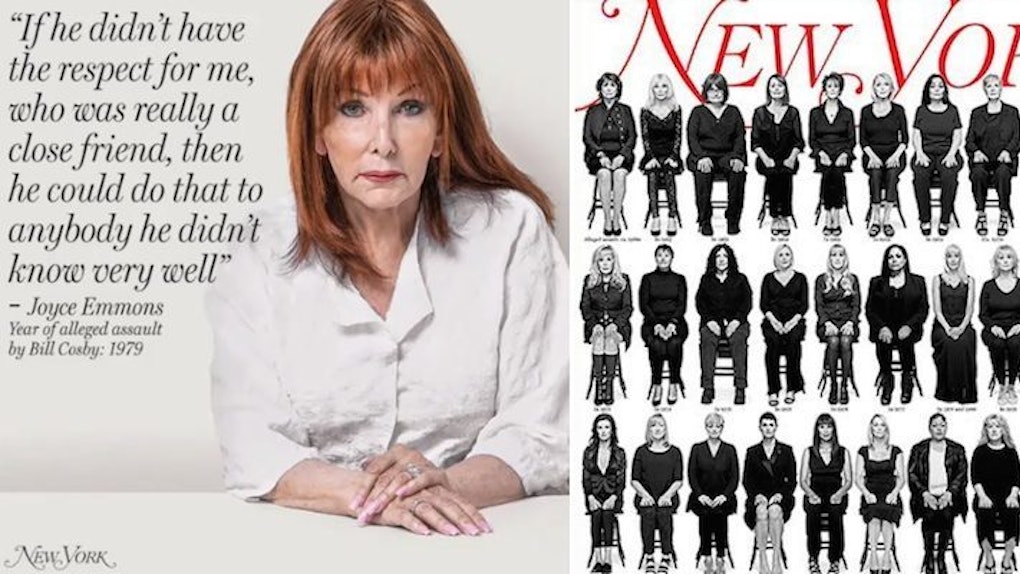 New York magazine is taking a stand against sexual assault, and it's letting the victims take the reigns.

On the cover of this week's issue, the magazine pictured 35 of Bill Cosby's sexual assault victims as part of an exposé that documents the disturbing allegations against the 78-year-old comedian.

The sure-to-be historical cover comes just over a week after The New York Times published court documents from a 2005 lawsuit filed by victim Andrea Constand, who was allegedly drugged and, subsequently, raped by Cosby.

In Cosby's deposition -- included in the documents -- he insisted the sex between him and Constand was consensual despite admitting he gave the woman sedatives.

Last night, New York magazine posted a photo of the issue's cover on Instagram, along with the following caption:

So far, 46 women have come forward to accuse Bill Cosby of sexual assault, in some cases, according to a recently unsealed deposition, with the aid of quaaludes — a powerful sedative that can render a person functionally immobile. But these allegations are by no means new, with some stretching back decades — to a time when the culture of rape in America left victims little recourse but to suffer silently, and in shame. Today, the way we think and talk about rape has evolved, creating a safer space for surveyors to feel empowered by speaking up and reclaiming their victimhood. And that's led us here. Of the 46 women who have come forward to accuse Cosby, we spoke to 35 of them — 'a sorrowful sisterhood' of women united by their dark experiences, steadfast in their resolve to remain silent no more.

For this week's issue of New York magazine, 35 of Cosby's 46 alleged victims are pictured on the cover...

...and clips from the women's interviews will be featured on New York magazine's Instagram page.

I hope, by coming forward, these women will get the justice they deserve.

Pick up the issue on newsstands today.