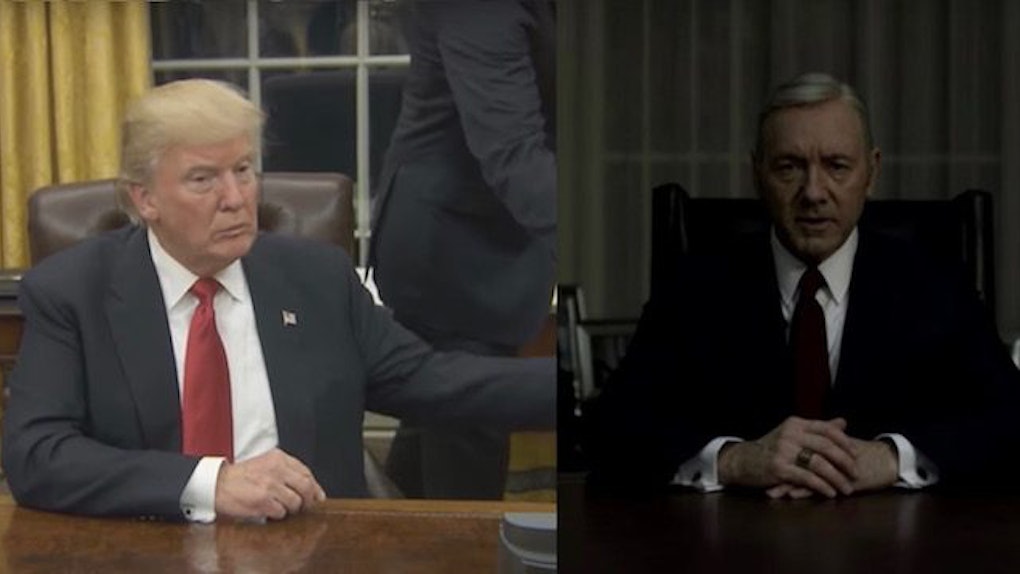 When Donald Trump won the presidency, he ruined more than you think. Think of the squashed dreams of immigrants wanting a prosperous life in America.

Along with them, Trump is the buzzkill of formerly good movies and television shows.

When you will try to watch these in Trump's America, you will find them rather embarrassing.

Both these movies were based on the same plot: the presidential candidate or President makes a gaffe which destroys his entire political career.

Frank does win his party's primary, but he loses his home state, which is a big embarrassment.

Once Trump won the battle for the White House, this scenario was killed. Trump and his staff made so many mistakes during the campaign and after they arrived at the White House! Yet none of these colossal gaffes ruined his political course.

Trump's father was arrested during a KKK investigation, which has a striking resemblance to the "House of Cards'" plot. Trump also bragged about grabbing women, mocked a disabled reporter and made all the possible gaffes in his appearances.

While Howard Dean was close to see his campaign buried for a funny yell, Trump seems to be thriving.

All in one, this plot will never be valid again, as nowadays politicians can do anything and get away with it.

Another nice show we used to watch on the streaming sites is "Designated Survivor," where an inexperienced person gets to be the President and manages to bring the country together with his lack of experience.

Trump is an inexperienced person, but his biggest achievement since he took over Presidency is to separate people and the nation.

"Designated Survivor's" main character was a down to earth, middle-class person who was focused on getting things done.

Trump is the opposite. He's a millionaire, he's definitely not down to earth and he has an extreme approach to everything.

In this show, Leslie Knope runs for the city council against Bobby Newport.

The latter is a playboy with rich parents, pretty dumb and with no political experience. If this rings a bell, it's not my fault!

Despite Newport's childish and ignorant behavior, he gets a lot of backup from the general public, so Knope barely wins the race.

The media did notice the similarities between Trump and characters like Newport, but there is one big difference.

The dream of having someone from "the people” to take down "the man" backfired with Trump, so this plot is never going to appeal again to writers and audiences.

This is a show about an alternative reality, where Nazis are back to rule the world. The show is disturbing, because it shows how easy it would be for Americans to embrace Fascism and turn it into reality.

But this plot won't work anymore and won't scare anyone, as we are already seeing extreme fascist behavior in America. Just take a look on Twitter, where Neo-Nazis are spreading their beliefs. Not to mention the recent vandalism of Jewish communities.

TNT wanted to make a show on the presidential campaign and how its effects on social media sent the country into civil war.

But when a presidential candidate made a habit of sending tweets that cause rage among the general public, the show was killed.

Who would want to watch a show that depicts the daily reality of living with Trump as a president?