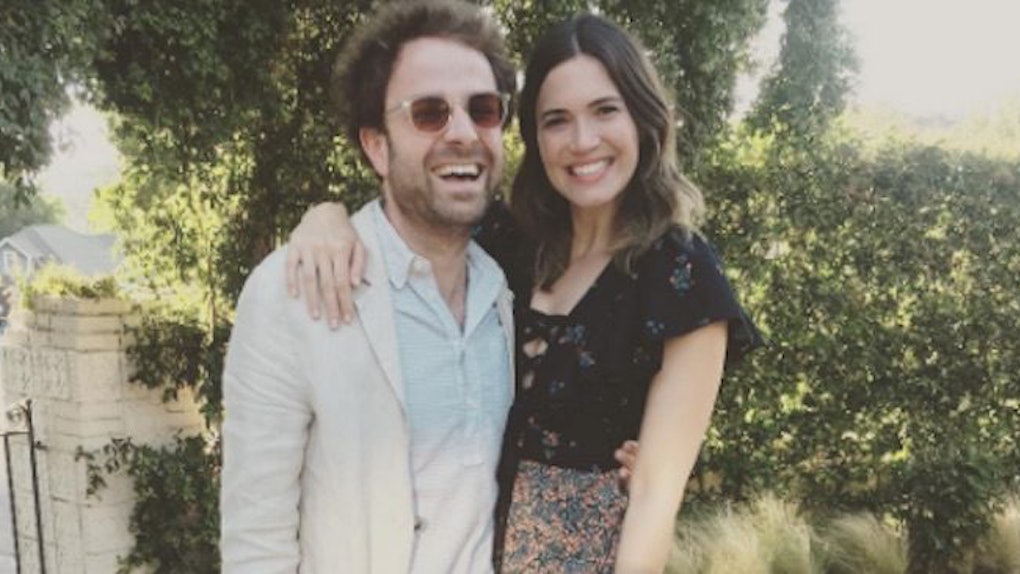 Mandy Moore is having quite the year. She stars on pretty much one of the biggest TV shows on the planet, and now it seems she's opening a new and important chapter in her personal life. According to the latest reports and some loose-lipped This Is Us colleagues, the actress is engaged to her boyfriend of over two years, Taylor Goldsmith. So, who is Mandy Moore's fiance? And what are her co-stars saying about the exciting news?

"I was just in the studio with her her boyfriend, well now fiance, Taylor. He didn't say a word! He seemed a little effervescent, but he's always pretty effervescent... I know him very well," Chris Sullivan, who plays Toby on the NBC drama, shared with Entertainment Tonight. "He's quickly becoming one of my favorite people, and he and Mandy are an incredible couple."

Fiance? You don't say? Mandy has not officially confirmed the upcoming nuptials herself, but she has been spotted rocking a new piece of jewelry and entertainment journalist Marc Malkin posted the engagement news to Facebook on Tuesday.

"I think it's amazing. Good for her. I'm happy for her," Jon Huertas (This Is Us's Miguel) told ET. "Taylor is an amazing guy. I love him so much. I love Mandy so much. I'm really happy that they're going to be joining the club!"

According to Chris Sullivan, she told her TV pals over a "family text chain." We're happy for Mandy and all, but knowing that the This Is Us circle of friends has a group text is everything.

Mandy and her musician boyfriend Taylor have been dating for a little over two years. Taylor is the frontman and guitarist for the folk rock band Dawes. His brother, Griffin Goldsmith, actually plays the drums for the group. Dawes has five studio albums and even opened up for Bob Dylan in 2013. In 2012 they made a cameo in an episode of Parenthood, an NBC family drama that has been compared to This Is Us, coincidentally enough. You may recall Peter Krause and Dax Shepherd's characters had a recording studio, so the scene revolved around getting the band to work with them. Of course, Mandy's an encouraging fan.

Taylor and Mandy look positively adorable. So adorable, in fact, that we forgive her for not spending every waking moment with Jack Pearson. Yes, we know the show is fictional, but we can't help it.

Mandy's even gushed about her apparent hubby-to-be on social media, letting fans in on their adventures together.

And Taylor hasn't exactly been PDA-shy on the 'gram either.

Mandy was married to musician Ryan Adams for six years, but the couple split in 2015. She was previously linked to Zach Braff from 2004 until 2006 (she even made an appearance on Scrubs) and was in a relationship with tennis player Andy Roddick until 2004. Back in her Candy-coated pop-star days, she dated Wilmer Valderrama, from 2000-2002.

The engagement isn't the only thing Mandy should be celebrating right now. Her show This Is Us is nominated for eleven (!) Emmys. While we personally think Mandy was snubbed for her portrayal of Pearson matriarch Rebecca, her co-stars Sterling K. Brown, Chrissy Metz, Ron Cephas Jones, and Milo Ventimiglia are all up for awards.Gerald McRaney, also known as the lovable Dr. K, already picked up a win at the Creative Arts Emmys for Best Drama Guest Actor. This Is Up is in the running for one of the biggest trophies of the night, Outstanding Drama. Let the nail biting ensue.

Well, wishes are in order for Mandy and Taylor, so congrats, you two! And we can't wait to see the This Is Us cast walk the red carpet and go for gold at the Emmys this Sunday. Perhaps they're all going over outfit choices and speech options in that group chat right now...