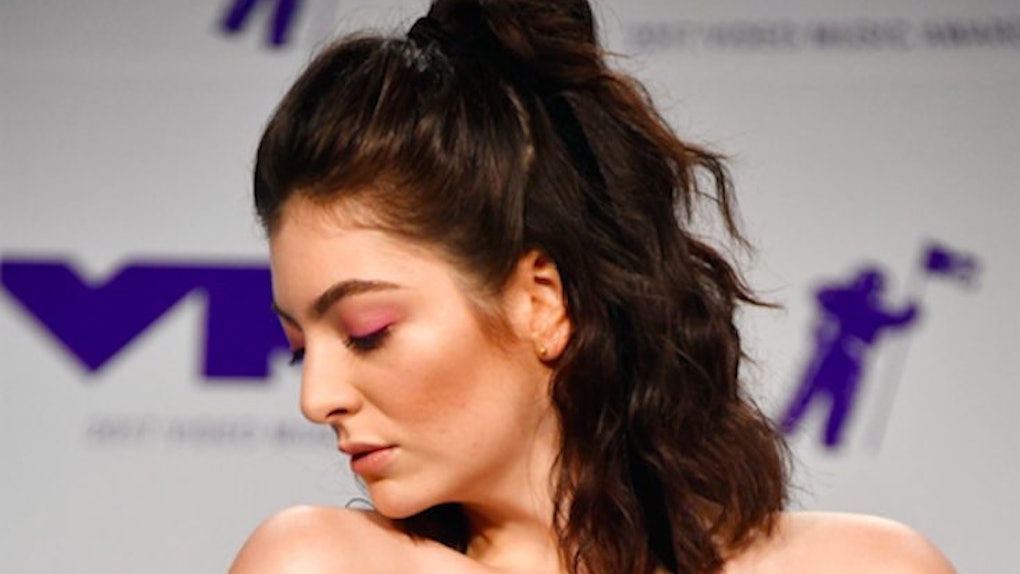 OK, so I know this isn't the first time I've thought this, and I guarantee it won't be the last, but WTF, Lorde?! Lorde's performance at the MTV VMAs was, as expected, an artistic spectacle, but there was one thing glaringly missing from the pop star's show: her voice. The singer tweeted earlier in the night that she had the flu and was being treated with an IV, so that could definitely explain the voiceless performance she gave; voiceless or not, though, girl went all in and, considering how many bops her latest album gave me, I'm not mad at her at all. I guess I'm just shocked because I'm so used to hearing Lorde's signature rasp whenever she hits the stage.

Lorde took to the stage dressed in a tutu like dress to perform her banger "Homemade Dynamite" off her new album, Melodrama. I kept waiting for the moment in the performance when she would ditch the backup track and start singing live as she normally does (I also had my fingers crossed she would transition into "Perfect Places"), but that moment never came; instead, she just lived her best interpretive dance life and gave me the strange realness I've come to expect from her as an artist.

Of course, the internet had a bit to say about the performance. Some people were confused, some were disappointed, some were thrilled, and some said it looked like them at the club.

We should really be thrilled we stan an artist who's so dedicated to her fans and her work that she showed up to an awards show where she's not even nominated and put on a damn good show despite her needing an IV only hours before.

I'm sure we'll have plenty more Lorde performances at awards shows to come, so we can just look forward to those for now.