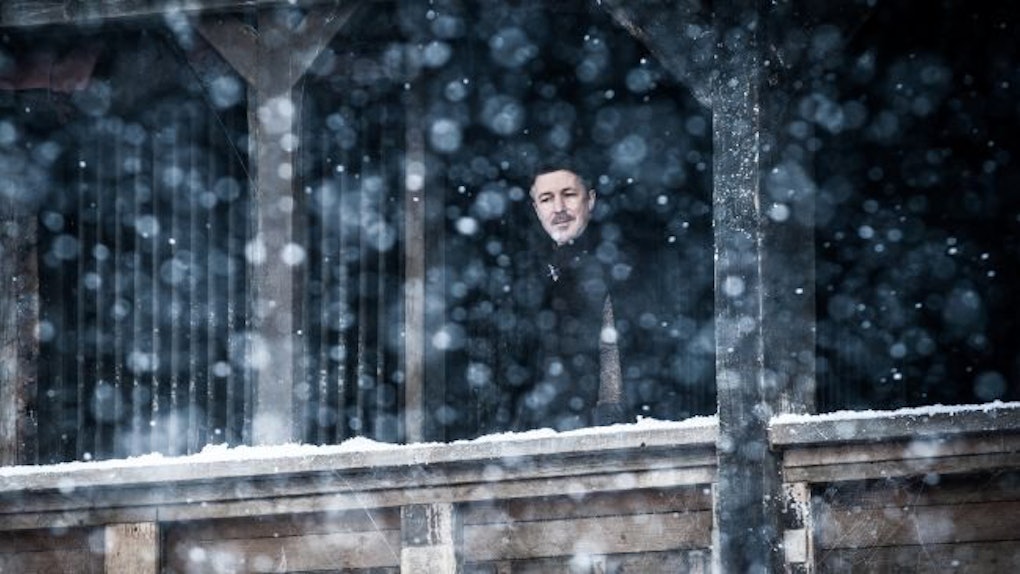 Amid the big reveals, betrayals, and dragon attacks in the Game of Thrones Season 7 finale, one moment really stood out among the rest for fans. Spoiler alert: Don't read on if you haven't watch the Season 7 finale of Game of Thrones yet. Of course, the moment that caused the most fandom rejoicing was the death of Littlefinger. Though it appeared that Littlefinger's insidious plan to turn Sansa against her sister Arya this season was working, the Lady of Winterfell revealed she had him figured out all along during Sunday night's finale and surprised him by sentencing him to death instead of Arya. Littlefinger's shocked reaction was so good, it inspired a ton of people to turn it into a meme. These Littlefinger memes from the Game of Thrones finale are the best way to celebrate the death of the master manipulator that's been torturing all our favorite characters in Westeros for years.

As a refresher of what happened, Littlefinger kept pushing Sansa to turn on Arya in the finale, implying that her little sister had actually returned to Winterfell in order to murder Sansa. But in the end, Sansa saw right through Littlefinger. She called everyone into the great hall under the guise of sentencing Arya to death, but at the last minute, she turned her attention to Littlefinger and sentenced him instead. Though he tried his best to plead his way out of it, Arya winds up slitting Littlefinger's throat.

But the most meme-worthy moment was when Sansa shocked Littlefinger by sentencing him to death instead of Arya at the last minute. Littlefinger's surprised reaction drew some comparison to the already viral "blinking why guy" gif.

And the symbolism of the way Littlefinger was killed was not lost on fans. Arya used the same blade that Littlefinger threatened her father Ned Stark with back in Season 1.

Another moment from the scene that fans loved was when Bran stepped up to help his sisters out in their plan. Littlefinger tried to get himself out of the sentencing by pointing out that nobody was there to witness his crimes, but now that Bran is the all-seeing Three-Eyed Raven, he was able to produce the receipts.

But mostly, fans were just pleased Littlefinger is finally dead.

Now we've just got to hope Cersei gets what's coming to her next season.