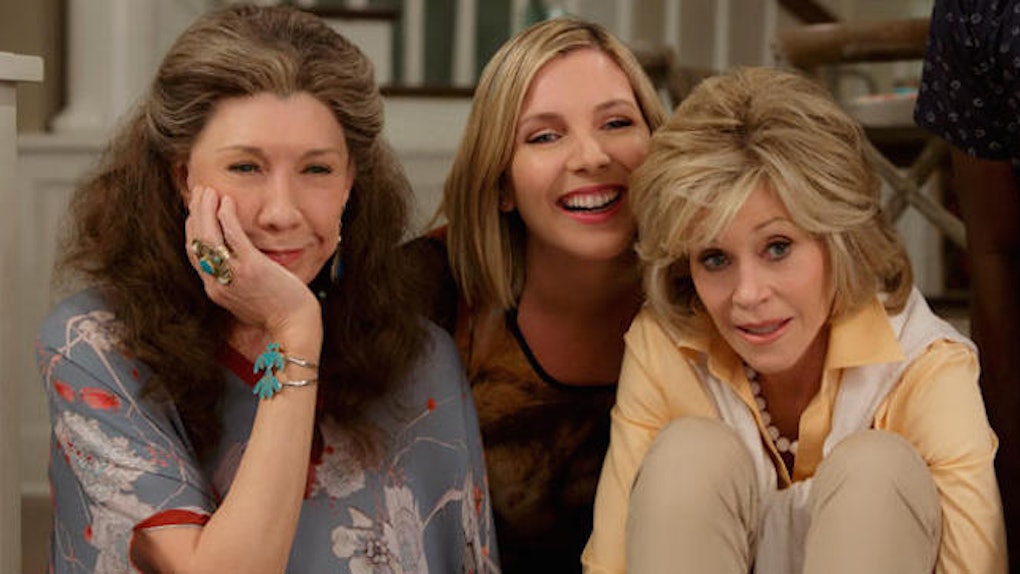 Learning Knows No Age: 5 Gen-Y Takeaways From 'Grace And Frankie'

It’s no surprise that Netflix has churned out another winner for its loyal legion of binge-watchers. Even Miley Cyrus thinks so.

"Grace and Frankie" can be devoured in just 6.5 hours, which, in Millennial time, equates to a Saturday afternoon.

It also happens to star Jane Fonda and Lily Tomlin, two acting legends who are well-versed at bringing humor and humanity to the screen in fresh, nuanced doses.

It’s no wonder why I’ve already watched the first season three times and am contemplating round four. According to a recent tweet from Miley Cyrus, she has also “found [her] show.”

Who wouldn’t want to witness two rivals of a certain age recreate their lives after their husbands both come out of the closet and declare their love for each other?

I, for one, certainly expected to be entertained.

What I didn’t expect was the serious magic these seasoned actresses would work on me — a Millennial — in the process.

And since the show has been renewed for a second season, it is clear that "Grace and Frankie" is not just having an effect on the older generation.

Here are some pearls of wisdom I gleaned from a show written with a much older audience in mind. These are lessons that can benefit all Gen-Yers:

1. Your worldview really does determine your happiness.

Grace (Fonda) is a high-strung ex-career woman who tends to view the world through a negative lens.

Frankie (Tomlin) is a free-spirited, anything-is-possible artist with a much more positive disposition.

As viewers, we get to see life through their wise but totally opposite sets of eyes. As humans, we are left to ask ourselves which eyes we tend to see through.

My guess is many adults relate well to Grace. My hope is that Millennials are a bit more inspired by Frankie.

Frankie is free. She hums and chants and makes whale noises.

She is the prime example of a hip woman and a hip human.

She makes us wonder what would life be like if we dropped our issues for a moment and danced to music that moved us or vented our frustrations to a video camera and didn’t immediately click "send" for all of YouTube to see.

She refuses to let negative emotions consume her for long and guess what? She’s generally happier as a result.

Even when life throws her curve balls, she handles them with humor, maturity and ironically enough, grace.

Grace, on the other hand, is often negative, takes out her anger on the wrong people and struggles to find her own happiness.

Through her actions, Frankie demonstrates that we can be free from everyday stresses if we simply alter how we see and react to the challenges life sends our way.

Even in the darkest of times, each individual choice we make proportionately affects our overall happiness.

Frankie knows this and thus, views her world through a kaleidoscope instead of a rearview mirror.

What would our worlds be like if we all learned to do the same?

2. Not paying attention today could be detrimental tomorrow.

There is a moment in the first episode when Grace asks herself how she couldn’t have known in over 40 years of marriage that her husband was gay. “Where was I?” she wonders.

She blames herself for not paying attention.

Frankie admits that even when she recognized signs that her husband might be gay, she ignored them.

In the world of the show, hindsight is 20/20. But for us, self-awareness is as vital to our present as it is to our future.

We are Millennials. We are perceptive people. We know what’s happening in the world, and we know it is up to us to fix what isn’t working.

So, why do so many of today’s problems get swept under the rug? Why is it so easy to be selective about the truths we face and the ones we choose to bury?

Let’s be honest: The truth can really hurt sometimes. It exposes us, makes us vulnerable and forces us to make life-changing decisions we’re not always ready to make.

But is it better to face the truth that something in your life isn’t working or spend your days feeling “happy enough?"

Grace chose “happy enough,” and turned out to be quite the pessimist. I have a sneaking suspicion she’s not alone.

Paying attention means being honest with ourselves. It means asking questions and seeking solutions. It means facing the music.

Paying attention saves us time, keeps us responsible and ensures that we have at least a little bit of control over our own lives.

It is the difference between letting life happen and happening to life.

Be a self-proclaimed amateur sleuth like Frankie. The more questions you ask now, the less you may grievously contemplate later.

And, it’s better for “later” to be today than 40 years down the road, right?

3. Acceptance is a key step of letting go and embracing change.

When Frankie realizes that she can no longer be in the same house as her soon-to-be ex-husband, she flees to the beach to clear her mind and embark on a “vision quest” to find “insight, tranquility and acceptance.”

Both she and Grace spend the rest of the season bouncing back and forth between varying states of change: shock, denial, confusion, rage and reflection.

As in any real-life situation, total acceptance takes a great deal of time and sometimes never reaches fruition.

It all depends on the person, the situation and the progress of that individual over a period of time.

"Grace and Frankie" does us all a major solid by embracing the truth that acceptance is not an easy part of the process.

Each character struggles with accepting what has happened to him or her repeatedly over the course of the show.

In the world of these characters, as in our lives, sometimes the only thing harder than accepting a great change can be the change itself. But, change cannot occur without accepting what has preceded it.

It is only by practicing acceptance that we can come to terms with what has happened to us, let it go and allow room for change to occur.

Without acceptance, we can become weighed down by the other stages, like denial, confusion or rage, and never truly move on to the next parts of our journeys.

Neither Grace nor Frankie accepts what has happened to her in the blink of an eye. Each woman’s process is an ongoing one, a reminder that this is not only allowed, it’s encouraged.

The only way to really move past one of life’s roadblocks is to power through them, and the only way to find the light on the other side is to practice acceptance as you go.

4. Sometimes you just have to say YES.

We are a society that spends a great deal of time saying “no.” No to dreams, no to risks, no to insurance salesmen. No, no, no.

Grace loves the word “no.” Frankie does not. In fact, she and her ex-husband invented what they call a “yes night,” which is a night of saying “yes” to anything and everything that comes their way.

What if we started saying yes to life instead of denying ourselves worlds of opportunity? What might we accomplish, not for society or anyone else, but for ourselves?

Wouldn’t the collective end up benefiting from every individual’s impassioned pursuit of happiness in the end?

We have all seen how unhappy people become when they throw in the towel and give up on their dreams. Those people said no to their ambitions and yes to conformity.

But, we have also been fortunate enough to see many young people today succeed, from actors and athletes to authors and YouTubers.

These Millennials said yes to their dreams and no to the notion that life should be lived inside a cubicle or box.

It can be done, but only by embracing the “yes” moments in life, big and small.

Sometimes, the only way to change your life is to take the one risk you’re most tempted to say “no” to.

When Grace decides to start dating again, she takes a risk by creating an online dating profile and dating.

When Frankie grows tired of spending her days home alone, she studies ads in the paper and goes out on a job interview.

Even in the midst of unsavory circumstances, they both take a leap of faith.

They say yes. (And the adventures they have when they share an actual “yes night” together, well — you’ll just have to see how that one goes).

And the beautiful truth is that it is one of the simplest words to say.

5. It is never too late to be what you might have been.

This is a show about two women in their 70s who are given a chance to completely reinvent their lives.

And let’s not forget about their two ex-husbands, also in their 70s, who are embarking upon their first homosexual relationship together.

This concept has been fed to us time and time again in television, film, literature, theatre, you name it.

So why does "Grace and Frankie" choose to focus on it yet again? Clearly, the message just isn’t sinking in.

Many of us witness it every day: friends and loved ones trading in their dreams for a paycheck.

Just like refusing to pay attention, it is ridiculously easy to settle for less than we think we deserve.

But I would venture to guess that many of us know exactly what it is we want to be doing.

It’s what we dream about in the quiet moments of our lives. It’s what makes us truly excited about being on this planet in the first place.

When Grace and Frankie’s lives are shattered, they are faced with the inevitable question, “What now?” They both realize just how free they are to do whatever they want.

Grace rekindles a friendship with a man from her past that blossoms into something a bit more romantic.

Frankie turns to painting and even pursues a love interest of her own. Day by day, they start to embrace new lives and become new people.

As Millennials, we have an advantage over those who are older, and have yet to grasp the concept of living life to the fullest.

We are still young and fully capable of changing direction at any time.

If we feel like dropping out of law school and backpacking through Tuscany, we can very well do that. We can go back to college, take a cooking class, learn martial arts.

We can do whatever we want.

It may be unfamiliar terrain, and we may make a million mistakes along the way, but those mistakes will feed us in ways that playing it safe and pretending that “it’s too late” never would.

If two 70-somethings like Grace and Frankie can do it, then we, Millennials, certainly can, too. It is never too late for us.