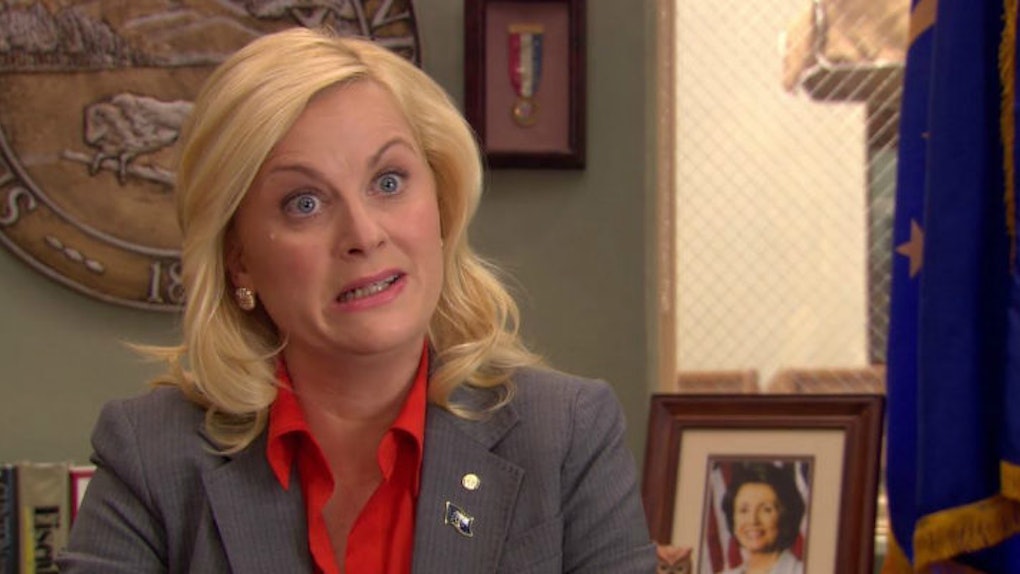 We are a nation in mourning.

Despite winning the popular vote, Hillary Clinton did not shatter that final glass ceiling. Instead, we elected a "giant farting T. rex."

Or so Leslie Knope so lovingly put it.

Of course, Leslie Knope is a fictional character, but the "Parks and Recreation" writing team penned a powerful essay for Vox and one we so desperately needed to hear in the wake of Donald Trump being elected our 45th president.

Knope realized that the Electoral College has spoken, but she refuses to accept it.

A classmate read a speech from Speedy, in which he promised that if he was elected school would end early, they would have more recess and he would give everyone chocolate pizzandy.

Knope explains "pizzandy" was "a local Pawnee delicacy at the time: deep fried pizza where the crust was candy bars."

Meanwhile Knope read Greenie's speech, and she promised to think about problems and try her best to solve them to benefit the most people.

But then, outta nowhere, her classmate nominated a third person, saying,

I nominate a T. rex named Dr. Farts who wears sunglasses and plays the saxophone, and his plan is to fart as much as possible and eat all the teachers.

And Dr. Farts won in a landslide. Knope compares this farting T. Rex to Donald Trump.

I acknowledge that Donald Trump is the president. I understand, intellectually, that he won the election. But I do not accept that our country has descended into the hatred-swirled slop pile that he lives in. I reject out of hand the notion that we have thrown up our hands and succumbed to racism, xenophobia, misogyny, and crypto-fascism. I do not accept that. I reject that. I fight that. Today, and tomorrow, and every day until the next election, I reject and fight that story.

She also had a special message for girls, adding,

Hi, girls. On behalf of the grown-ups of America who care about you and your futures, I am awfully sorry about how miserably we screwed this up. We elected a giant farting T. rex who does not like you, or care about you, or think about you, unless he is scanning your bodies with his creepy T. rex eyes or trying to physically grab you like a toy his daddy got him (or would have, if his daddy had loved him).

She says that Trump is everything we should "abhor and fear in a male role model." She writes that he has spent his life telling women that they are valueless except as sexual objects,

He has demeaned you, and belittled you, and put you in a little box to be looked at and not heard. It is your job, and the job of girls and women like you, to bust out.

She finishes her letter,

Citations: A letter to America from Leslie Knope, regarding Donald Trump (Vox)