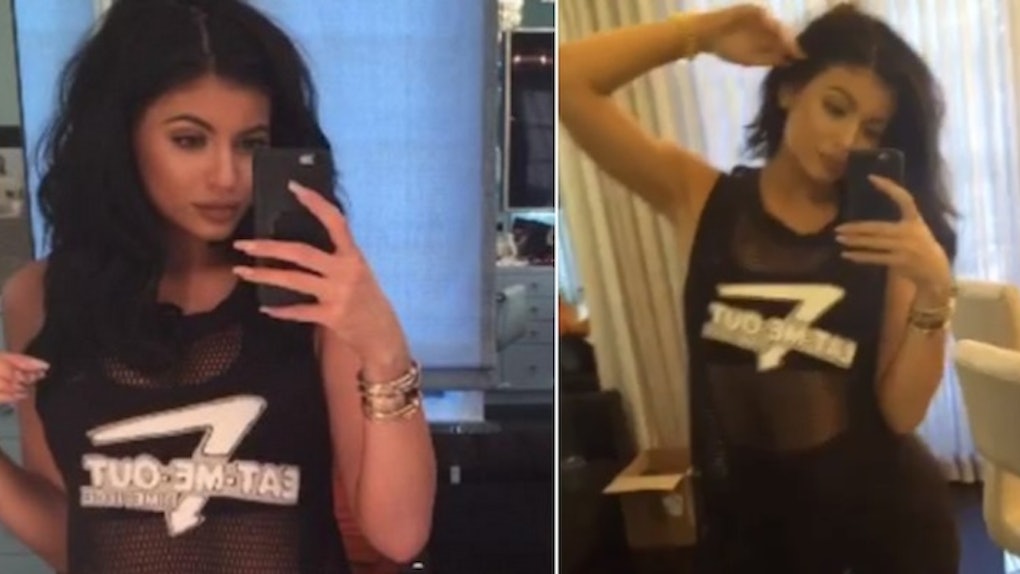 Another week, another Kardashian Kontroversy.

This time, it's Kylie in the ringer -- and it's all because of a shirt.

Over the weekend, the 17-year-old posted several videos to her Snapchat account featuring her wearing a mesh tank emblazoned with the words “Eat Me Out.”

The sexually explicit reference caused quite the stir on social media, with many referencing Jenner's age as justification for their harsh criticism.

Kylie, who turns 18 in just a few weeks, has yet to comment on the controversy -- probably because it's really not that big of a deal.

But plenty of her fans spoke out. In fact, many flocked to the reality starlet's defense, prompting a Twitter war of sorts between the haters and the lovers.

The controversy started over the weekend when Kylie posted a series of selfie videos to Snapchat.

In the videos, she's seen wearing the graphic shirt while dancing in front of a mirror.

Some seem offended by the explicit nature of the shirt's message...

Nothing classier than seeing 17 year old Kylie Jenner dance around to the song "Rich $ex" while wearing a shirt that says "Eat Me Out" :-) — KT (@warmbloodprobs) July 26, 2015

...while others seem more affronted by her age.

Looking at Kylie Jenner's snap chat and she had on a mesh shirt with the in-n-out logo but it says eat-me-out. Child. You are 17. Chill. — coolbreeeze (@coolbreeeze_) July 26, 2015

A common thread among the haters was the shirt was just plain trashy.

Others used the controversy to insist "money can't buy class."

Kylie's fans are in her court, though.

Some are even taking the message as an invitation.

Kylie Jenner is wearing a top that says "Eat Me Out" on her snapchat. The answer is yes. — ashley (@ashleylantzy) July 26, 2015

But, this girl said it best.

why do people care so much that kylie jenner was wearing a shirt that had "eat me out" on it like. let her live her life and you live yours — megan (@magiqman) July 27, 2015

Time to move on, guys.

In other news kylie jenner's shirt says eat me out with the In-N-Out logo pic.twitter.com/uAjPYly4QF — holly sams (@hollysams_) July 26, 2015

Citations: Everyone Is Losing Their Minds Over Kylie Jenners Racy Shirt (Huffington Post)