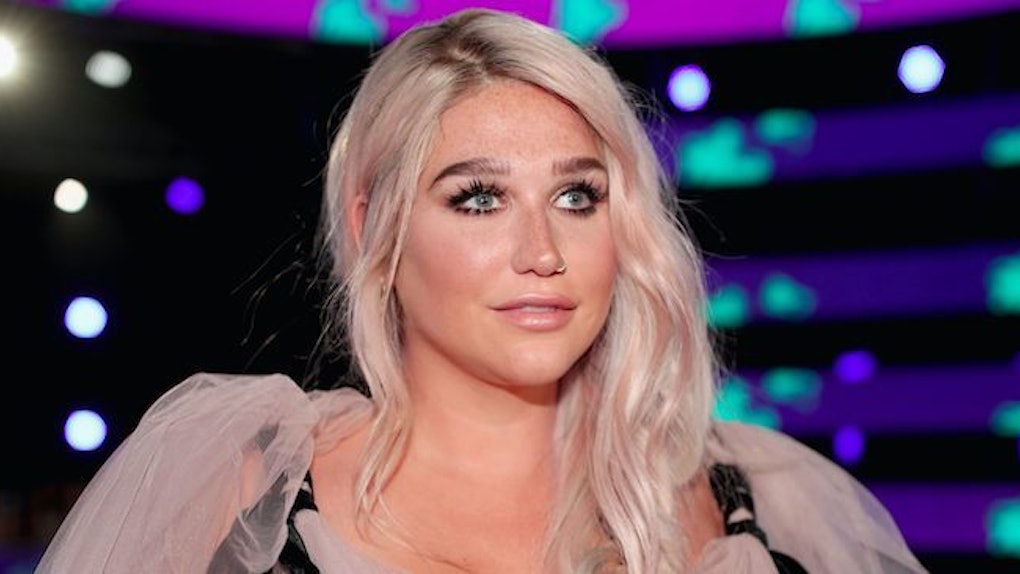 Transcript Of Kesha's Speech At 2017 VMAs Was So, So Emotional

So we know it's been one hell of a long journey to see Kesha back on the VMAs stage; she's had a rough few years and hasn't been able to release music as a result of her legal battles with Dr. Luke, but, through her struggle, she has become an emblem of perseverance and strength, which is why I'm thrilled to say that Kesha's speech at the 2017 VMAs was one of the most touching, important, and poignant moments of the entire night. The pop star we love took to the stage to introduce Logic, Khalid, and Alessia Cara before they performed Logic's song "1-800-273-8255," and, in her speech, addressed the sensitive subjects of suicide and feeling alone.

In her speech, she said,

It has been said that if you knew who walked beside you, you could never experience fear or doubt again. Every so often, a rare but important song and video come along that let's us know how true that is. The moving piece of film and music that is the video for "1-800-273-8255" brought me to tears. The truth is piercing and the truth is what matters. And the truth is that none of us is alone. It takes great courage to show the vulnerable side of being human, and we all have that vulnerable side. Whatever you are going through, however dark it may seem, there is an undeniable truth and strength in the fact that you are not alone. We all have struggles, and as long as you never give up on yourself, light will break through the darkness. The National Suicide Prevention Lifeline is available to you 24/7 if you are in crisis or concerned about someone who might be, just dial 1-800-273-8255. Now, to walk alongside all of us, joined by suicide-attempt survivors, I present to you Logic, Alessia Cara, and Khalid.

The "Praying" singer emphasized the fact that no one in this world is alone, and made sure to mention how to reach the suicide prevention hotline. Following his performance, Logic echoed Kesha's sentiments; he said,

I just want to thank you all for giving me a platform to talk about mental health suicide an depression ... I don't give a damn if you're black, white, or any color in between, I'm going to fight for your equality.

In a year that has seen the sensitive topic of mental illness crop up repeatedly in the media, this is exactly the type of awareness and resource we need to see.

If you or anyone you know is contemplating suicide, the Suicide Prevention Hotline can be reached 24/7 at 1-800-273-8255 or online at www.suicidepreventionlifeline.org.