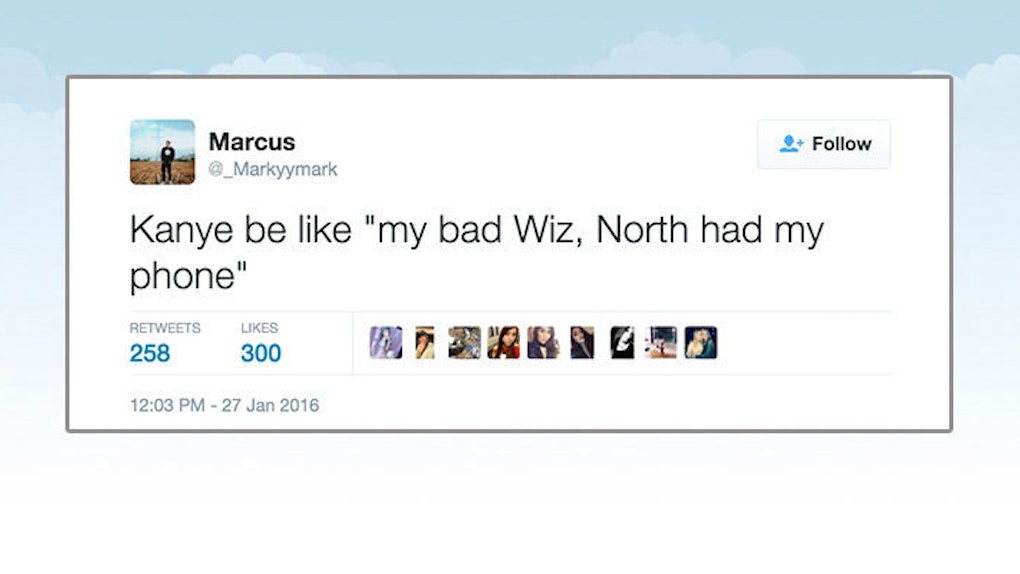 Twitter has never been more united than on Tuesday afternoon when we all dropped what we were doing to watch Kanye West go off on Wiz Khalifa.

What 'Ye was so riled about was hardly the biggest thing to take away, but I'll give you the context anyway.

Basically, Wiz (sort of) insinuated in a tweet the title of Kanye's new album, WAVES, was ripped off another rapper's style without any credit.

It was all very shady and vague. Kanye, of course, never heard the word "subtle" in his life and went straight for the jugular, calling Wiz out in a series of nearly 30 angry tweets. Kanye deleted the tweets. BUT, DON'T STRESS, WE GOT YOU COVERED!

There were so many great moments, but, to me, what's most beautiful was not 'Ye's fascination with Wiz's pants or the hilariously-unbelievable assertion he just wants "peace and positive energy."

No, what is most beautiful, to me, was the way we, the common people, came together in this moment of absurdity to offer our witty and eloquent commentary.

1. When those first five tweets or so started to roll in, we all settled in for what would surely be a magical time.

2. What a magical time it was.

3. It's not every day the Twittersphere is blessed with such gifts.

4. Kanye on Twitter is just so confusing and so relatable at the same time.

5. Aaaaand then, he ruined it with those Amber Rose comments.

6. I guess we all know not to say anything to Kanye ever.

8. I'm definitely going to be waiting for this headline in The New York Times.

10. I'm not sure even Bey could undo this damage.

11. What is happening to all the rappers on Twitter lately???

12. I think we can all agree we learned a lot about each other today.

13. This day will go down in (music) history textbooks.

14. Now, we're just waiting for Kanye to weigh in on a different Wiz...

Thank you, Kanye, for providing us all with such raw, comedic material. You launched many stand-up careers today.