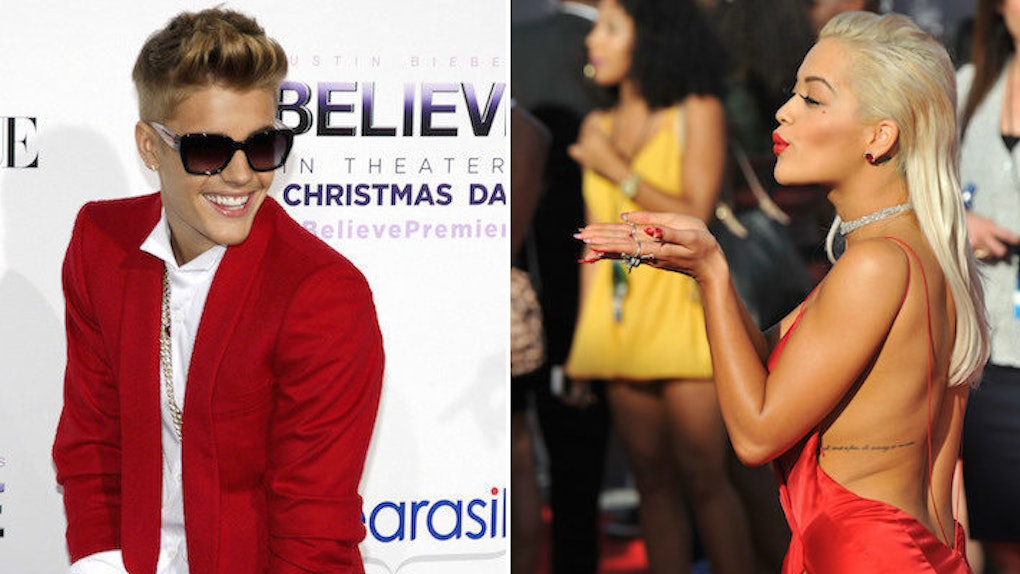 Are Justin Bieber And Rita Ora The Newest Power Couple?

I know, I'm sorry. “Justa Bora” is catchy and brilliant and deserves its moment in the spotlight. Perhaps another time, though.

The Biebs was snuggled up in a hoodie covering most of his face, while Ora covered up in, oh, also a hoodie. Hoodies all around.

Though the singers left the venue together, Bieber hopped in a black car with an unnamed companion, Daily Mail reports.

The still-unidentified woman whom I've been calling “boobies lady” in preparation for this post was probably not named by a 4-year-old boy and is therefore more likely called something nice like “Vanessa” or “Carol.”

In the event Bieber and Ora are in the early stages of some sweet summer romance, he might want to consider being a little more discreet about the other irons he has in the fire.

Here's wishing all three of them (and both hoodies) luck in love.

Citations: Something to hide, guys? Justin Bieber hides his face with zip up hoodie as he parties with leggy Rita Ora... before heading home with a mystery busty brunette Read more: http://www.dailymail.co.uk/tvshowbiz/article-3621581/Not-feelig-Confident-Justin-Bieber-hides-face-zip-hoodie-puts-biazrre-display-arriving-LA-club.html#ixzz4ARbLxP1A Follow us: @MailOnline on Twitter | DailyMail on Facebook (Daily Mail)