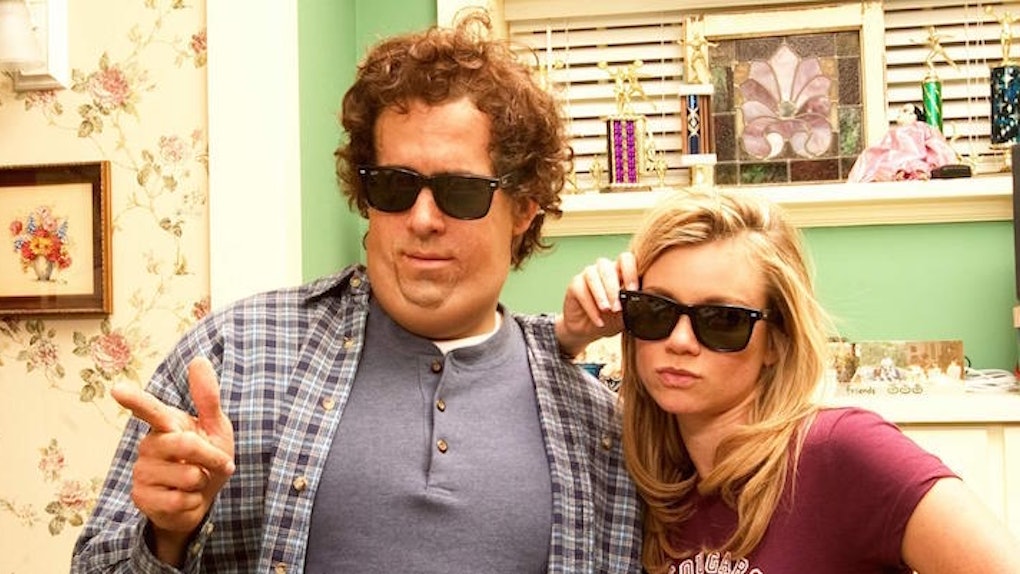 You go from riding your bike to school to riding the subway to work.

Upon realizing this rom-com gem came out a whole, fat decade ago, I felt like a lumberjack had taken a direct swing at my ego.

On top of that, it occurred to me yet again that "Just Friends" deserves megaphone praise for its obscenely funny dialogue.

If a movie remains just as hilarious 10 years after its debut, we can assume it will be funny indefinitely.

That’s a rare bird, my friends.

The film’s plot revolves around Chris Brander (Ryan Reynolds, who starts the movie out in a fat suit).

They are solely pals, and it's strictly platonic. Except, Chris wants more.

This is a common trope of Millennials, whose support of co-ed friendship is unparalleled.

Also, more male-female BFFs inevitably result in someone wishing to take the relationship to a romantic level.

2. Being At The Mercy Of A Jerk Boss

After Chris gets publicly rejected, he runs off to LA.

After 1o years in the City of Angels, we see him achieve financial, physical and sexual success as a record producer.

His life is full of glitz and glam, and he's totally vapid.

For instance, he agrees to pretend-date Samantha James (played with mercurial perfection by scene-snatcher, Anna Faris).

He does this because his boss wants Samantha's next album, and he threatens to fire Chris if he can’t deliver the goods.

Doing something ethically dubious (at best) to keep a job? Ask some Millennials.

They’ve probably done it, or at least, they've been asked to.

Samantha is 100 percent unbearable, and Chris doesn’t try hard (or at all, really) to conceal his loathing.

However, she remains clueless.

They fly to Paris for Christmas.

Stranded in New Jersey near Chris' hometown, Samantha pouts, shrugs off blame, suspects she’s been “punk’d by Ashton” and then turns to Chris and purrs,

I love it that you’re taking me home to meet your mom. Was this one of your clever little plans?

To which he replies,

Yes. I planned you setting the plane on fire.

If Samantha heard him, she gives no indication of comprehending his disgust.

Being involved with someone who won’t take a hint? Ask some Millennials.

They’ve probably been there.

Mike is unabashedly turned on by Samantha, and Chris effectively passes her off to him for the rest of the movie.

This works, since Chris runs into Jamie at the local town pub, and he decides he will use his new status as a sexy hunk to finally woo her.

The rest of the film follows his numerous flubs and fumbles in this pursuit, before (spoiler alert) he finally finds his soul buried beneath several years’ worth of jerk behavior.

You may know a Millennial or two who never moved away, but the odds are high you don’t know many.

We’re a mobile breed, and "Just Friends" is true to that.

5. A Time Capsule Of 20th And 21st Century Cultures Colliding

Though both Chris and Mike Brander appear a few times with cell phones, no one else does.

Instead, there are several scenes that create humor around that old relic of bygone years, the landline.

Other curiosities of the mid-aughts include the popularity of malls and caring about the environment.

Samantha goes to the former in hopes of encountering a “cross-section” of her fans, scribbling lyrics to another god-awful song:

Chris gets shunned for his lack of the latter when another blast from the high school past, Dusty Dinkleman, shows up to give him some competition for Jamie’s attention.

Dusty brags about driving his Prius, to which Chris' mom asks of her son, “Don’t you drive a Range Rover? Aren’t those bad?”

6. Comedy That Trusts Its Audience

"Just Friends" earns its extra credit in its refusal to pander to the audience.

There’s no explanation for Samantha’s erratic behavior, and there are so many blink-and-you-miss-it lines of dialogue gold that you might want to read the script after you watch.

Otherwise known as vintage Ryan Reynolds, this movie features the unapologetic walking embodiment of snark and sarcasm he was prior to “serious” movie attempts, like "Green Lantern" and "Woman in Gold."

I can’t speak for everyone, but I'm pretty happy to see Reynolds return to form in the upcoming "Deadpool."

But, that’s beside the point.

What we’re talking about here is "Just Friends," and I hereby submit to you, reader, its nomination as the Millennial holiday classic.

Now, get thee to Netflix.