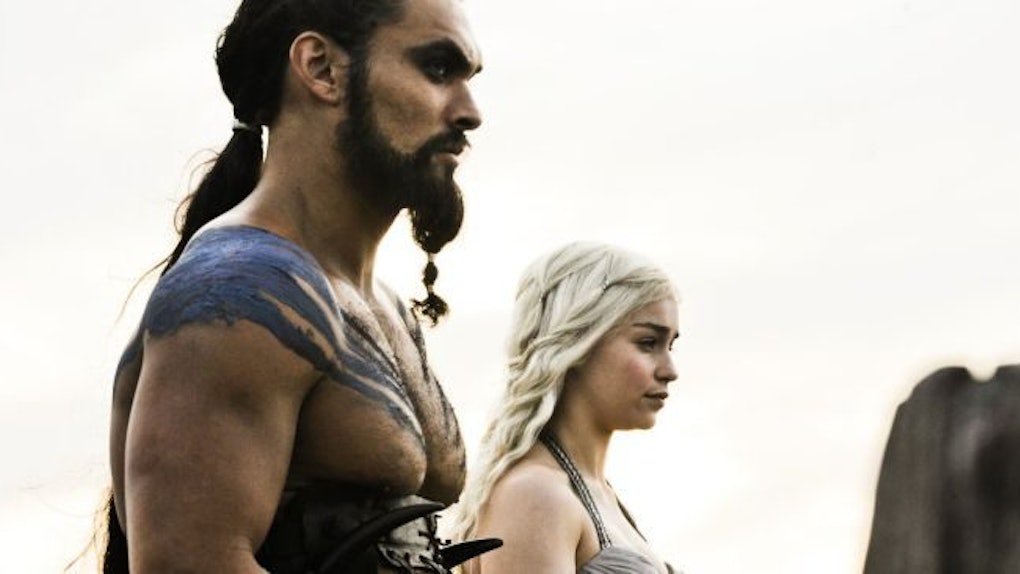 There are very few pure relationships in the world of Westeros -- most marriages are arranged, most love affairs are as much about power and control as they are passion. It's rare that we see a love story that carries across time, space and continents on Game of Thrones. But if there's any relationship we'd want to emulate, it's Dany's first marriage, to Drogo, which is a love affair that continues to this day via Jason Momoa's Instagram.

Though theirs was an arranged marriage, by the time we reached the halfway point of the first season, it was a tale for the ages, as Dany earned the respect and pride of the greatest Khal to ride the Great Grass Sea. And Dany (Emilia Clarke) loved her Drogo (Jason Momoa) so desperately she attempted to bring him back from death at the end of Season 1. And, well, we all know how that turned out. His burning body helped her birth her babies, just not the quite the way he was envisioning when everyone said their child would be a "Stallion Who Mounts The World." (Somehow we think Drogo wasn't counting on wings.)

But just because Jason Momoa's character has been dead for six seasons doesn't mean the actor hasn't been paying attention.

In fact, Momoa, who is a superfan of the show, takes to his Instagram *every time* Clarke does something badass on screen, and cheers her on, ever the proud husband, rooting for the Moon of his Life.

This week's battle, known as the "Loot Train Attack," was an amazing feat of filming, and would have been impressive on any size screen, but even more so that it was accomplished on a TV budget. The Dothraki were finally allowed to show themselves to be the menacing threat they were promised to be all those years ago.

Even more impressively, unlike, say Drogon's flight paths, the Dothraki riders were not an impressive feat of CGI, but actual stunt artists who rode those horses across the plains of Spain and stood up in those saddles as a unit as they galloped, and fired arrows into the Lannister forces.

We're only sorry that Momoa's character did not survive to ride into battle and lead those 40,000 Dothraki screamers into battle this past week. We're sure seeing him ride beside Dany, taking down the Lannisters, would have been a sight for the ages.