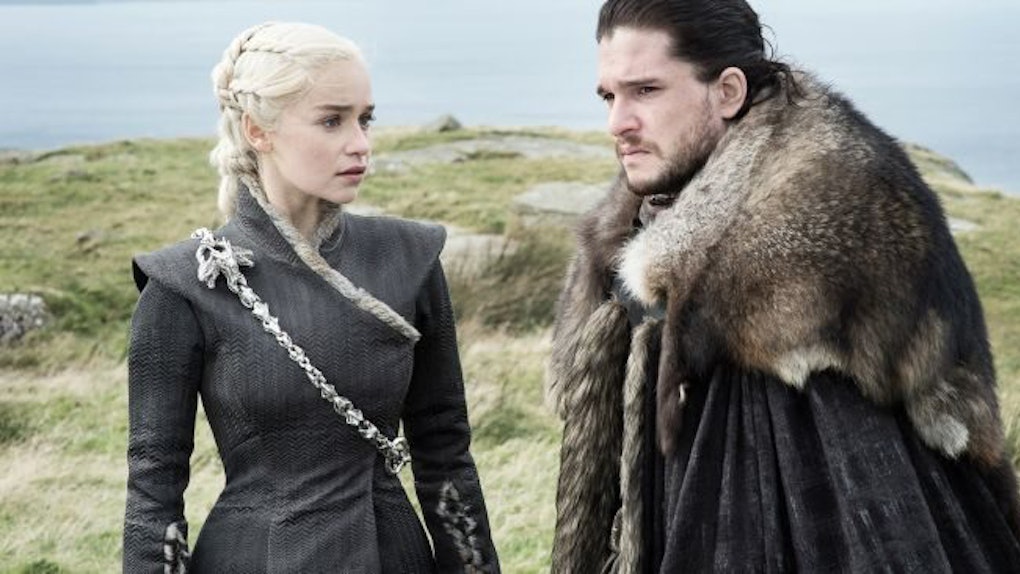 Is Daenerys Pregnant? 'Game Of Thrones' Fans Are Dying To Know

This post contains spoilers from the Game Of Thrones Season 7 finale. Tonight's finale of Game of Thrones Season 7 gave us a triple whammy: birth, sex, and marriage. We got to see Rhaegar and Lyanna marry for love in the midst of war. We saw Lyanna name Jon Snow on her death bed, his real name, Aegon Targaryen. But most inevitably, we saw Jon Snow and Daenerys Targaryen disappear behind the door and spend the night together. And with no birth control in sight, here's the question everyone is asking: Is Daenerys pregnant?

Let's rewind a minute. Last week, Daenerys told Jon Snow she could never have children, and that her dragons were her babies. This is not the first time she's said this either. This seems odd since in Season 1 she got pregnant pretty quickly with Drogo. So what changed?

Back at the end of Season 1, as Daenerys neared her term, Drogo was in a very bad fight, and his wounds got infected. Dany begged him to get modern medicine, but Dothraki leaders would never show such weakness. Instead, he rode his horse until he fell off, and Dany found herself about to be a widow with a baby, no Khal, no horde, and her path to Westeros blocked.

Untenable. She was desperate. So she turned to a witch named Mirri Maz Duur, and begged her to perform blood magic to bring Drogo back.

Duur did as asked, but letter of the law, not spirit. Drogo was alive, but he was a useless zombie. And the blood magic killed the baby in Daenery's womb, causing her to have a still birth. Moreover, in the books, Durr proclaims this curse upon her:

When the sun rises in the west and sets in the east. When the seas go dry and mountains blow in the wind like leaves. When your womb quickens again, and you bear a living child. Then he will return, and not before.

She means Drogo returning, but Dany understands. Her womb will never quicken again. Though, as Jon himself asked, are we sure that this witch is a reliable source?

Not that Dany was going to say this in response, but since she never got pregnant by Daario, it seems a pretty fair bet.

But things can go sideways now, especially that the Wall has fallen, the Long Night has come and darkness is about to descend upon Westeros. Perhaps the sun will rise in the West next season, the seas will freeze over to appear dry, and the mountains shake from earthquakes, looking as if they blow in the wind.

Anything can happen. Maybe even Drogo's return, and Daenerys bearing a living, breathing Targaryen child to rule Westeros in a brand new dynasty in the spring.