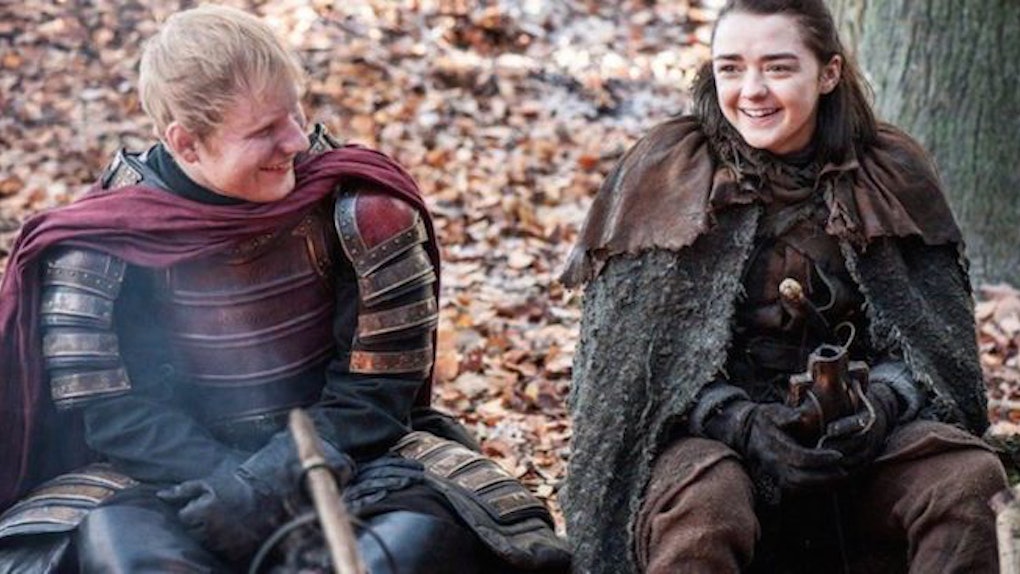 What Are The “Hands Of Gold” Lyrics From ‘Game Of Thrones’

Tonight of Game of Thrones, Ed Sheeran sang an odd little ditty as Arya came upon him and his Lannister buddies. But what was that song?

It's called "Hands of Gold," and for book readers, it has a serious significance.

In the books there's a character called Symon Silvertongue. He's a singer, and Tyrion catches him one night in the little house he's hiding Shae in in King's Landing during his time as Hand. Silvertongue is clearly trying to horn in on Shae, and he's also dumb enough to admit he know's she's Tyrion's bit on the side as well.

In A Storm of Swords, he is moved up to inside the castle to calm a pregnant character, Lollys. (In the TV show, she's someone Bronn is engaged to for a hot second in Season 5. In the books, she gets raped. it's a long story.) It's during this time that the song in question turns up. It's Symon's way of trying to blackmail Tyrion by letting him know he'll tell Cersei about Shae if he doesn't pay up.

He rode through the streets of the city, down from his hill on high, O'er the wynds and the steps and the cobbles, he rode to a woman's sigh. For she was his secret treasure, she was his shame and his bliss. And a chain and a keep are nothing, compared to a woman's kiss For hands of gold are always cold, but a woman's hands are warm...

Here's a fan made version:

In response, Tyrion has Bronn do away with Symon Silvertongue.

After that, it seems to be playing in his head all the time during the trip to Meereen, and whenever he thinks about Shae in general. (He's basically obsessed with her during the trip, a thing the show thankfully cut.)

It seemed like the show had mostly forgotten about Symon Silvertongue altogether. His storyline was cut for streamlining sake, and Tyrion never had that song stuck in his head once in the last six seasons.

But tonight the show resurrected it. Will it be Ed Sheeran's next big hit? Will it play on over the speakers at the gym next time you're on the treadmill? Will it be downloadable on iTunes? So far, no luck -- it's not even on YouTube yet. But hopefully soon!