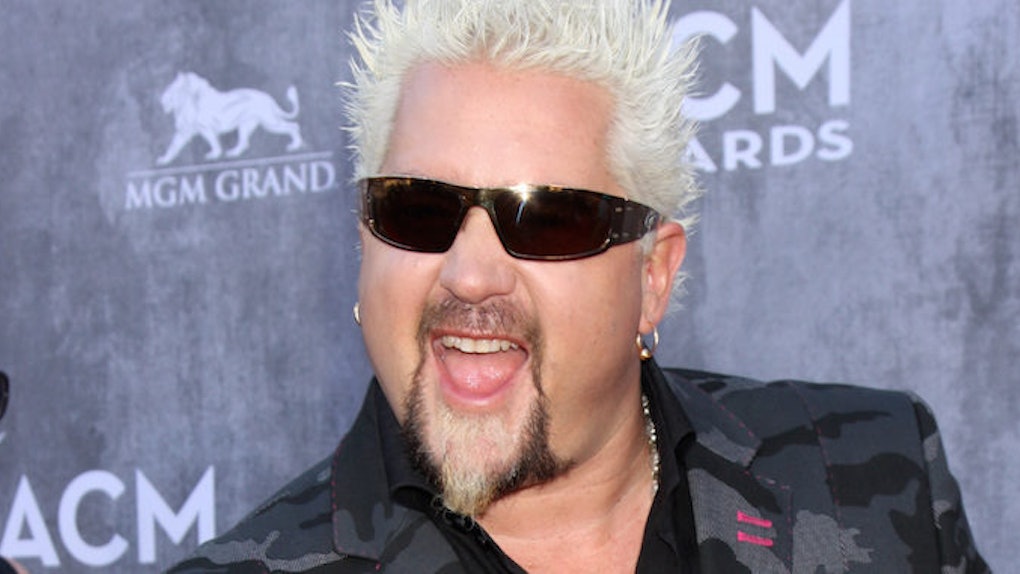 What are you up to this Saturday? Nothing? WRONG ANSWER.

This Saturday, November 19, will be the first ever "FieriCon" in NYC.

What does that mean?

Well, according to the event's site:

FieriCon is a collection of Guy Fieri enthusiasts who are going on a bar crawl in his honor. It will start at The Hog Pit and end at Guy's American Kitchen and Bar on November 19. A full list of bars will be announced a few weeks before the date. You can join the crawl at any time. You do not have to dress like Guy Fieri, but it is highly encouraged.

My friend and I have a Sunday tradition of eating Chinese food and watching Food Network, so Guy has become a pretty central figure in our lives. Anyway, we were just thinking about how funny it would be to dress and act like him for a day and it kind of morphed into this idea of FieriCon.

So how do you get Guy's look? Don't worry, the site has you covered.

This is the look you're going for:

Wondering where to get all of this Guy Fieri swag?! Don't worry, the website has STLL got you covered with links to buy each of the items pictured above. (Plus they're AFFORDABLE, each item is less than $20.)

Still not convinced a Guy Fieri-themed bar crawl is the greatest idea you've ever heard of? Dave sold me on going with this solid reason listed on the site:

A couple is out for a nice casual Saturday at their local watering hole. They're sitting down, looking into each other's eyes, sharing a plate of bruschetta and commenting on how much they love September in New York. Right as the guy is about to make a cheesy comment about how he loves her more than he loves September... BOOM... 60 people dressed up as Guy Fieri come rolling into the bar screaming, 'Welcome to Flavor Town!'

TELL ME THAT DOESN'T SOUND LIKE THE BEST, MOST HILARIOUS THING YOU'VE EVER HEARD IN YOUR ENTIRE LIFE.

Don't be a loser, buy your tickets to NYC and Amazon Prime your outfit right now.