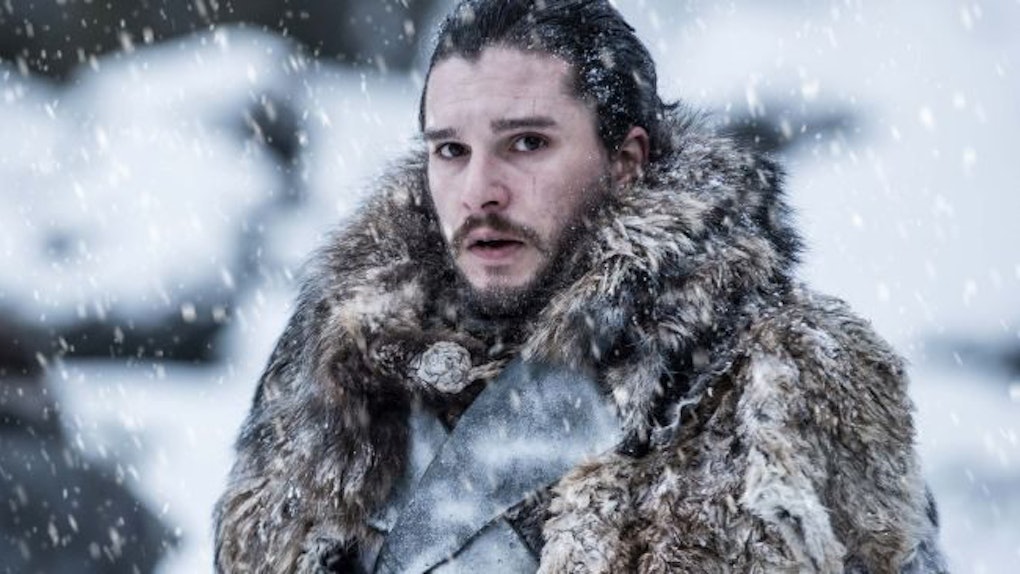 The worst-kept secret in Game of Thrones is finally officially out, and it's going to change the whole landscape of the show. Even better, we actually got to see a wedding flashback scene to confirm the coupling the show has been teasing fans with for a few seasons now. That's right — Jon Snow finally learned who his parents really were, and that famous R+L=J theory was confirmed when we saw Rhaegar Targaryen and Lyanna Stark get married.

Spoiler alert: This post will discuss details in the Game of Thrones Season 7 finale "The Dragon and the Wolf."

"The Dragon and the Wolf" was actually a great name for the finale episode for a couple reasons. For one, it refers to Daenerys and Jon Snow getting much closer, but it also references Rhaegar and Lyanna's marriage, the union that we know gave birth to Jon. Sam comes to Winterfell looking for Jon, but finds Bran instead. Using his new Three-Eyed Raven powers, Bran sees the wedding, and uncovers the truth about Jon.

Now, it's really not much of a secret among fans that Jon Snow is actually part Targaryen and part Stark, but we've been waiting so long for him to finally put the pieces together for himself. In Sunday's season finale, Bran, Sam, and the rest of us found out the truth about his parentage at long last, and viewers were treated to a flashback scene of Rhaegar Targaryen and Lyanna Stark's private wedding ceremony to drive the point home even more. Of course, this big reveal is going to change up everything for Jon. Now that he knows he's a Targaryen (or, well, he's going to know), it could embolden his claim to the throne, and also give him access to Dany's dragons. On the other hand, it also makes his flirty romantic relationship with Daenerys more objectionable, given that she is technically his aunt. Yeah...

But most importantly, fans can finally breathe a sigh of relief that we don't have to wait any longer for Jon Snow to finally learn the truth. I mean, it's been years of screaming at our TVs now — thank the Seven Gods he's finally clued in.