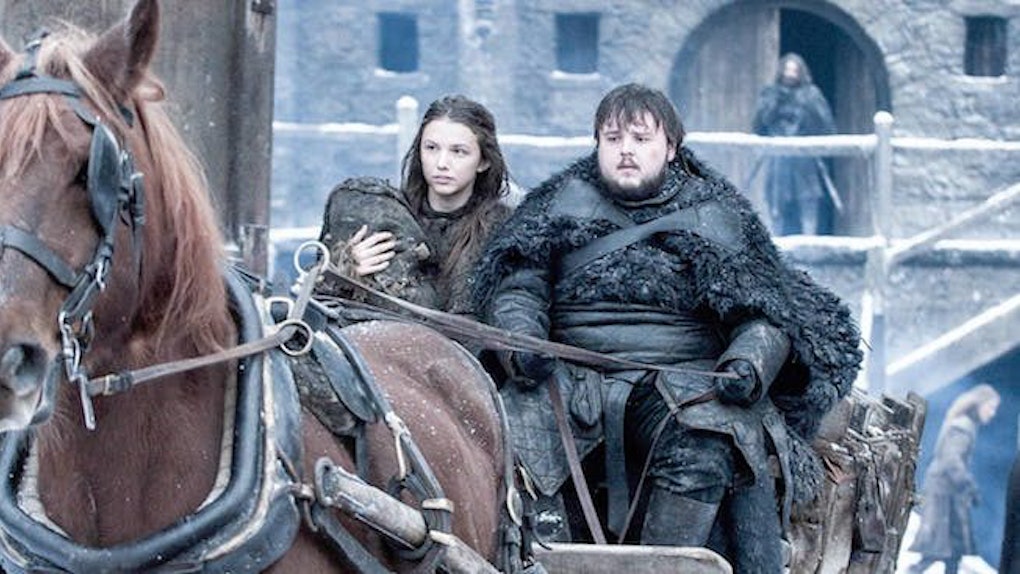 They may not necessarily be at the center of all the action on Game of Thrones this season, but Samwell Tarly and Gilly have been absolutely instrumental in uncovering some of the show's most important mysteries. Already in Season 7, Sam figured out how to cure Jorah Mormont's greyscale, and Gilly discovered the truth about Jon Snow's real parentage (despite being rudely interrupted before totally putting it together). And a popular Sam and Gilly theory claims the pair will be even more important as the show goes on.

It all goes back to the inspiration for Sam's character, who happens to be the other famous Sam in fantasy lore. George R. R. Martin created Samwell Tarly as a parallel to Samwise Gamgee from Lord of the Rings, another chubby sidekick with a heart of gold who's extremely loyal to his friends. One Quora user pointed out that Sam's storyline on GoT may also be paralleling Samwise's in LotR, including where both characters end up at the end of the sagas. After Frodo returned the ring to Mordor, it was up to Samwise to keep his story alive. Similarly, fans are predicting Jon Snow may end up lost or dying to protect Westeros from the White Walkers, and Samwell will live on to tell his heroic tale. Check out the full theory below.

In a series seemingly obsessed with killing off all its likable characters, it's comforting to know there's some hope for Sam and Gilly to wind up surviving the whole series. It sounds like Sam and Gilly may not be a part of some of the climactic battle scenes in the upcoming eighth and final season of Game of Thrones, but their importance will be in their intimate knowledge of everything that went down leading up to Jon Snow's battle against the White Walkers, and their devotion to keeping him alive in stories.