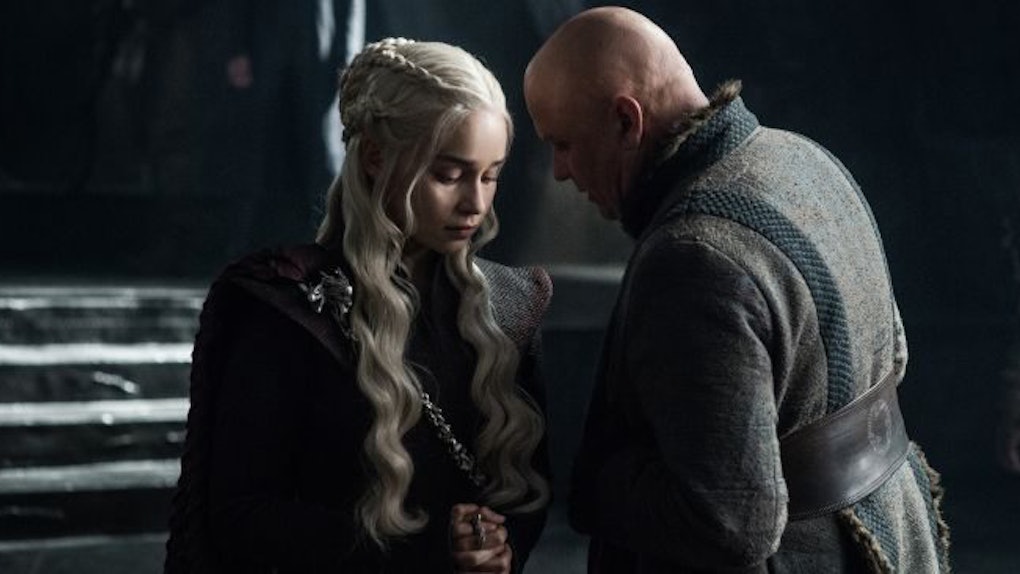 Some of the most powerful scenes last week on Game of Thrones took place in Dragonstone's "Chamber of the Painted Table." Tyrion's argument to conquer slow, for instance, and Olenna's "Be a Dragon" speech. But the most interesting was Dany's call out of Vary's various lords who he has served over the last seven seasons, and why she should believe him loyal to her. Varys may have claimed to be an honest broker to her, but there are signs he might change his mind. In fact, this Game Of Thrones theory suggests Varys will switch from loyalty from Dany before the show is done... and move to Jon Snow.

Jon Snow? Really? Here's the thing though: If you think about it, it makes sense.

Why is Varys following Dany? Because those on the Iron Throne since the fall of Mad King Aerys have not held the realm's best interests at heart. Rewinding backward: Tommen was a pawn of Cersei, Joffrey was as mad as Aerys, Robert was a drunken fool. Where else would a man turn? To the last people who did have the realm's best interests at heart: Targaryens. Because what other options did he have?

And that's the thing: Varys picked Dany because he didn't know of any other good options. If he even thought of Jon Snow (probably not), he would have seen a Bastard Stark who was running things up at Castle Black. Not exactly a sell for the Iron Throne. Meanwhile, Dany is, as he put it to Tyrion: "A ruler loved by millions, with a powerful army, and the right family name."

But now that Jon Snow is King in the North, and could be easily made a Stark if needed, we have a second candidate who could fulfill those requirements. Meanwhile, think of Dany's downsides that Varys has been politely ignoring because they didn't fit the facts as he would like them to be.

Issue 1: The Followers of R'hllor trying to make her the subject of prophecy. Varys literally wouldn't back Stannis because of Melisandre. If Dany brings her (or her higher ups) into the fold, you really think Varys will be OK with that?

Issue 2: The Dragons. Varys does not like magic. Dragons bring magic. (It's why the Maesters worked to destroy them.) While they might make Dany the favorite in a fight, can you really see Varys comfortable with a ruler who flies around on dragon-back and will not put her babies in the Dragonpit in chains, ever?

Meanwhile, if we look at the books, before Varys turns to Daenerys, he is enamored of another character who might take the throne, Aegon Targaryen. (He's cut from the show, don't worry.)

Quoting from A Dance With Dragons epilogue:

He has been trained in arms, as befits a knight to be, but that was not the end of his education. He reads and writes, speaks several tongues, he has studied history and law and poetry. A septa has instructed him in the mysteries of the Faith since he was old enough to understand them. He has lived with fisherfolk, worked with his hands, swum in rivers and mended nets and learned to wash his own clothes at need. He can fish and cook and bind up a wound, he knows what it is like to be hungry, to be hunted, to be afraid. Tommen has been taught that kingship is his right. Aegon knows that kingship is his duty, that a king must put his people first, and live and rule for them.

Worked with his hands? Trained in arms? All about "duty" instead of his "right to rule"? That's not Dany, you guys. That's Jon Snow, Real Westerosi Hero™.

Will Varys make the switch? Or if he tries, will Jon tell him to go back to Dany and follow the woman he's supposed to be supporting? Only time will tell.