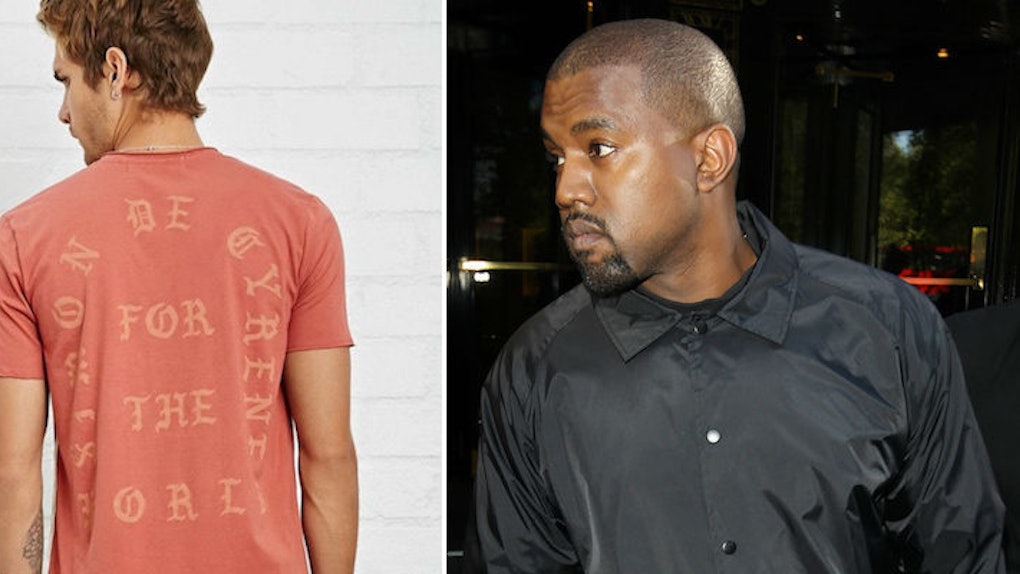 It looks like Forever 21 is selling a T-shirt that is nearly identical to Kanye West's recent T-shirt design.

Though, apparently, even if the Forever 21 designers were copying Kanye, Kanye copied someone else first.

A representative for the designer of the Forever 21 shirts said the "font and style" both the clothing store and Kanye used "are an homage to '80s/'90s LA Latino gang memorial graphic shirts/sweatshirts."

But it still seems kind of convenient Forever 21 decided to pay this homage right at the same time Kanye happened to be launching his Life of Pablo tour and selling that merchandise.

Look at the shirts for yourselves.

The font and layout are extremely similar to Kanye's Life of Pablo merchandise found on his website and his Manhattan pop-up shop.

Here is the shirt from Forever 21.

And here is the shirt from Kanye West's merchandise:

After the company came under fire for the similarities, it acknowledged in an official statement the designs looked the same, but both designers were copying an original source.

In an email to Complex, a representative for the designer Forever 21 used wrote,

While it is true that the Yeezy shirt made that particular font/ style/ design better known to the rest of the world, it's hardly the original. That font and style are an homage to 80's/90's LA Latino gang memorial graphic shirts/ sweatshirts (EN MEMORIADE...) that were made using 2" iron-on gothic letters. you'll see the style has been echoed in brands like born x raised. [...] there are resemblances, yes. But we believe we are both copying the same source.

Well, I guess if you want to pretend like you got Pablo tickets when you actually didn't, you know what store to hit up!

Citations: Forever 21 is selling a shirt that looks just like Kanye's 'Life of Pablo' merch (Mashable)