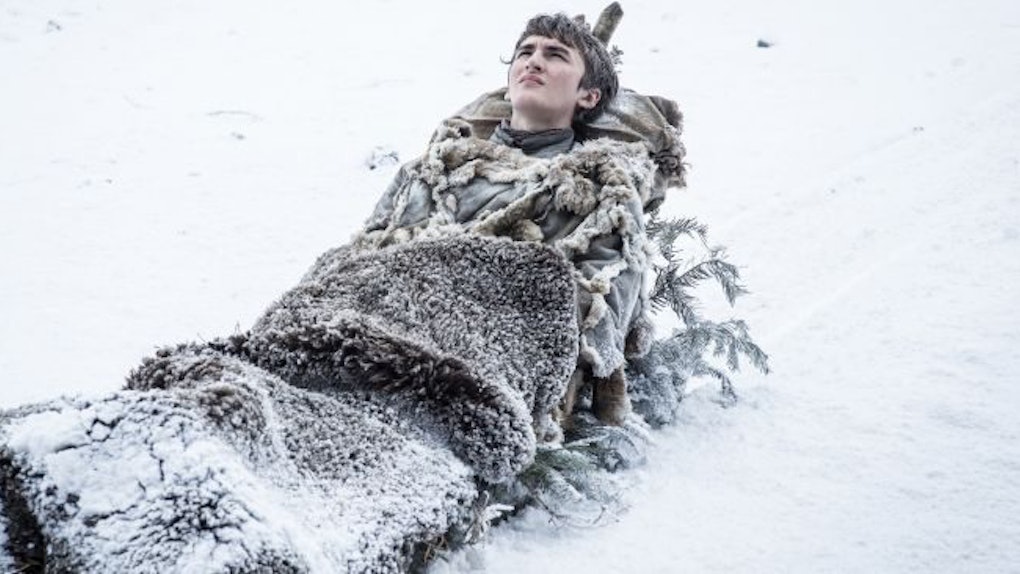 Is Bran The Night King On 'Game Of Thrones'?

Game of Thrones is a show that spawns fan theories faster than Cersei kills her enemies. From famously correct ones like "R+L=J," to the more outlandish ("Varys is a Merman, anyone?), it feels like every episode seems to spawn five theories even as it puts two to bed.

This week's episode resurrected a theory that first came up last year, after the horrific events of "The Door." Over on Reddit, a fan postulated that, because Bran clutched his chest as the Night King was made by the Children, he was somehow also the Night King. Even though Hodor just died to save Bran from the Night King.

Look, Hodor died. We were all really traumatized by that. It was a bad time. A theory like that could be excused as the product of a grieving mind.

But this week, it's come back again. Why? Because Bran was communing with the Night King, seeing him and his Undead Army walking while lying in his sled. Meanwhile, Meera was knocking on the gate to Castle Black.

Now, though the idea of Bran being somehow one with the Night King is as patently ludicrous as The Boy Who Lived being one and the same with He Who Must Not Be Named, there *is* the possibility of a connection between the two: The Night King may have been a Stark ancestor.

How do we know this? Well, on the show, we don't. That's because the show has altered the Night King enough that, unlike the books, the direct connection isn't as easily made. But... if we go back to the Night King's original creation in A Song of Ice and Fire, there's a major suggestion that he was a Stark before he was made into the Leader of the Undead.

In the books, he is referred to as "The Night's King," and it's one of Old Nan's stories that she tells to Bran and his siblings to frighten them to sleep. (It's one of those plot expositions that is revealed via "histories become legend, legends become myths" that George R.R. Martin is very fond of.)

According to the stories, back during the Age of Heroes, the Others (White Walkers) decided since they had failed to conquer via War during the Long Night, they would attempt "conquering by marriage." They targeted the 13th Lord Commander of the Night's Watch, who fell into their trap and became hopelessly in love with a White Walker Queen. She turned him into the Night's King. He then turned most of the Night's Watch who served him in the Nightfort (the original main base of the Wall.)

Though no one ever confirms this Lord Commander was a Stark, Old Nan believes it was. And it is highly suggested that the way the Stark family reacted, by leading the charge to take the Night's King down, they were attempting to make up for it being one of their own.

It is also why the keeps along the Wall do not have much in the way of fortification son their south side so that if this ever happened again, the North could come in and put the possessed down.

Now, of course, the show has changed this completely. The man we saw on screen who turned underwent that transformation during the fight between the First Men and the Children, decades, if not centuries before the Long Night ever happened or the Wall was built.

But the show does like to bring in easter eggs for book readers when they can, even if the storyline that held the original plot point was cut. And that's why I wouldn't be surprised if at some point the Night King, name change and all, turned out to have Stark blood in him the same way Jon Snow, or Bran Stark, does, and that's why Bran's connection with him is so strong.