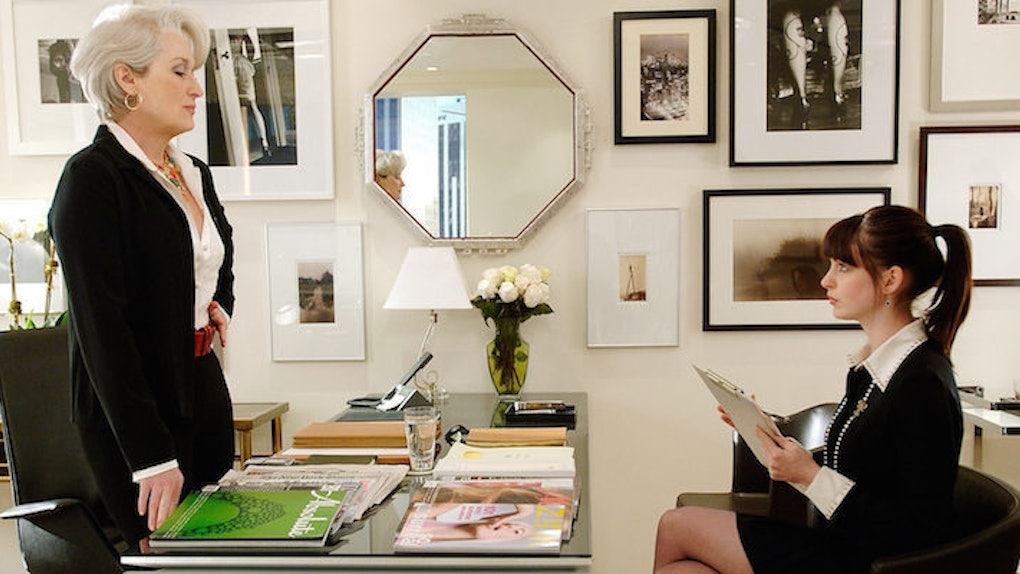 Fun Fact: “The Devil Wears Prada” was supposedly inches away from being less Anne Hathaway-ish.

Today marks the official 10 year ANNE-iversary (get it?) of “The Devil Wears Prada's” theatrical release. Yup, you should be feeling REALLY old after reading that.

The fact it's already been a decade since high-powered fashion magazine mogul Miranda Priestly ordered the young, inexperienced, wardrobe-ly challenged Andrea Sachs to run across Manhattan snagging pre-released copies of the newest "Harry Potter" book in her lumpy lapis (not blue, cerulean) sweater is insane, and I've never been more aware of my mortality.

In honor of the day, Vanity Fair ran an in-depth “how did this get made” piece on "TDWP," and as it turns out, we were very close to an Anne-less movie.

Hathaway pushed early on to at least be considered for Andy and ended up being brought in to meet with former Fox 2000 vice president Carla Hacken, knowing full well she wasn't their first choice. Anne supposedly wanted the role so badly after one of these meetings, she ham-fisted-ly wrote the words “Hire Me” into a zen sandbox on Hacken's desk.

The studio wanted a bigger name for the movie, though, and with “The Notebook” and “Mean Girls” under her belt, Rachel McAdams apparently seemed the clear choice for the role.

The only problem was she had no interest in doing the movie with Fox, as she wanted to stop being featured in mainstream pictures.

McAdams ended up turning down the studio's offers to do "TDWP" on multiple occasions, leaving the door wide open for Hathaway to swoop in and book the role.

Emily Blunt has an equally against-all-odds story of landing the role of Miranda's first assistant, Emily Charlton, as there were over 100 actresses being considered for the role.

Charlton wasn't even supposed to be British in the movie, but after seeing an audition tape where Blunt read the lines with a stern English accent, the people at Fox changed their minds about how they wanted the character to be played.

Even after seeing her audition tape and knowing she would be perfect for the movie, director David Frankel had to wait for “Eragon” to pass on Emily Blunt before booking her.