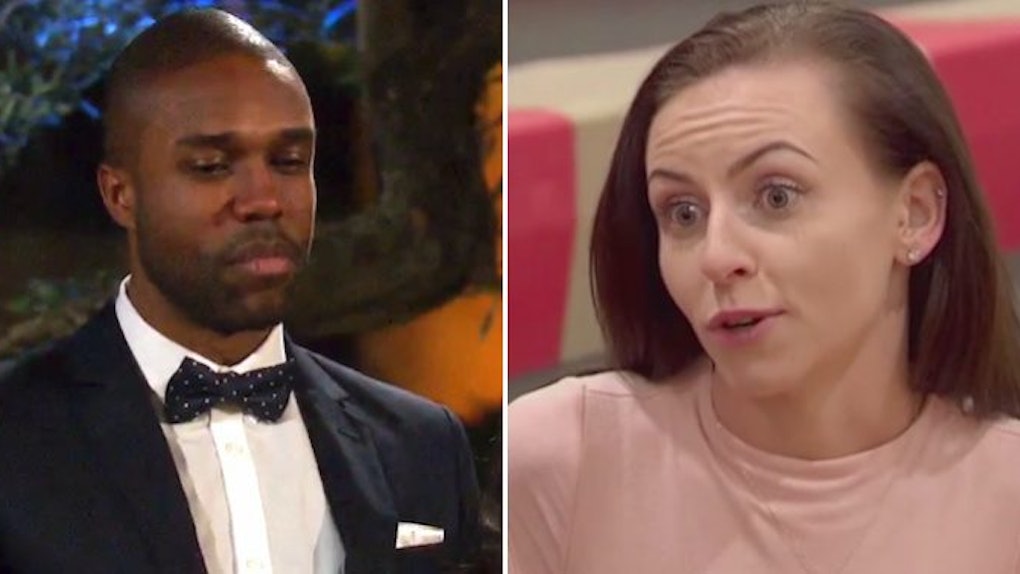 Who Is Bachelorette Contestant DeMario's Girlfriend?

Rachel Lindsay's season of The Bachelorette has barely started, but there's already plenty of drama.

Last week during the premiere episode, we began the 31-year-old's quest to find love.

We watched men come out of the limo and dazzle her with their wit, charm, and good-looks. There were, of course, a bunch of straight up weirdos (COUGH ADAM AND ADAM JR. WTF?!) but the man who took home "MVP" for the night was clearly my boy DeMario.

MMM, MMMM, MMMM. I don't even know where to begin. DeMario seems like the entire package, so he's already won my heart.

However, it looks like Rachel Lindsay should be careful with DeMario this season because he might not be here for the right reasons...

During last week's episode, we learned Bachelor contestant Whitney — who came on the show to talk to Rachel about her suitors — heard rumors DeMario doesn't have the best intentions.

Now this week, we learned more about what she meant.

During a scene from tonight's episode, Rachel met a woman who claimed to be DeMario's girlfriend. OH CRAP. NO, DEMARIO, NOOOOO.

I saw that, um, the first couple of guys were brought on to meet you... and I saw one guy, up until hours before that he'd been my boyfriend of seven months.

When Rachel asked, "Who?" the woman told her it was DeMario. YO, SH*T IS GOIN' DOWN.

After the conversation, Rachel spoke to the cameras in a confessional and explained,

This girl Lexie says she's in a relationship with DeMario and he disappears for a couple of days and the next time she's seeing him is on After the Final Rose, meeting me... I am completely taken aback.

According to the scene, here's everything we know: This woman claims DeMario lied and "deceived everyone he knows." He also, Lexie claims, still has the keys to her apartment... AND THEY NEVER BROKE UP!

Rachel immediately went to find DeMario so the three of them could talk, except DeMario didn't seem to have any idea what was really going down.

According to DeMario, he and Lexie met up a few times but stopped seeing each other shortly after. He says he went to her house before the show started to tell her he "couldn't do this anymore."

DeMario did admit he had something with Lexie at one point, but it was an off-again on-again relationship that was over now.

Rachel clearly wasn't buying it. She wanted to know when they cut it off OFFICIALLY, but DeMario couldn't give her an exact date.

Lexie then said Rachel could look at her phone to see the receipts. And then BOOM! It was over.

Rachel decided in that moment to send DeMario home because she didn't want to be played. However, the episode ended with DeMario returning to the Bachelor mansion to tell Rachel his side of the story... We'll have to wait until next week to see WTF that means.

At this point, it's unclear what Lexie's current relationship status is with DeMario but we do know one thing: He's definitely not getting Rachel's final rose this season.