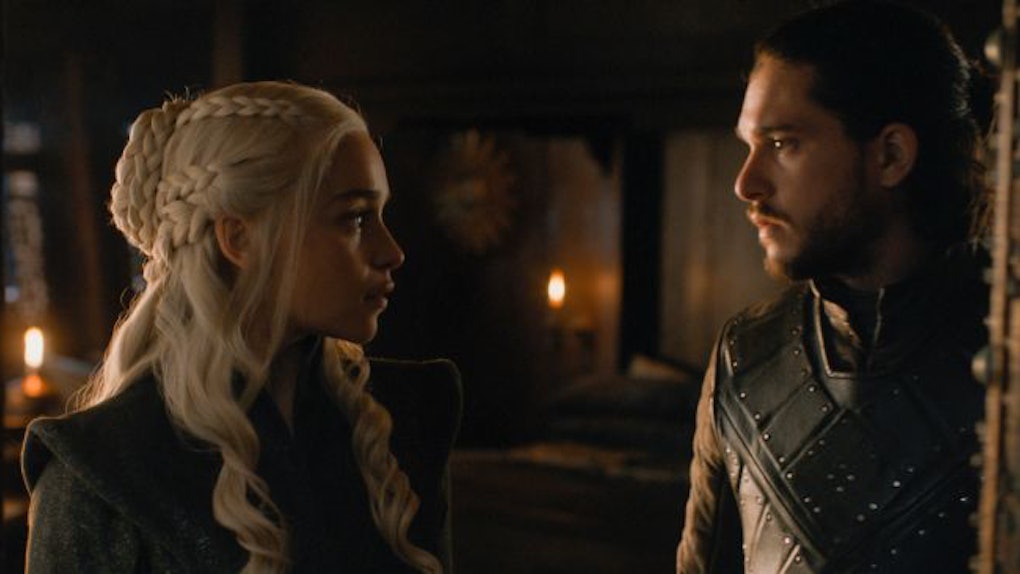 Game of Thrones' Season 7 finale had a little bit of everything, from family revenge to fan theory confirmations, to a whole lot of rocking and rolling in a certain someone's cabin on the ride to Winterfell. But while Jon Snow and Daenerys Targaryen were having horizontal refreshments, Tyrion Lannister was standing outside in the hall with a strange look on his face. Is Tyrion trying to sabotage Dany and Jon Snow?

While no one wants to believe bad things of Tyrion, it's a theory that could actually be correct. Because, as Peter Dinklage revealed at the beginning of the season, Tyrion has fallen in love with Daenerys, despite her being his employer.

Unfortunately, due to a combination of the season's pacing and the subtle nature of Dinklage's performance this year, a lot of fans haven't really noticed. But when you start looking at some of Tyrion's decisions through the lens of a man who is seeing the woman he's fallen in love with slip away to someone else, especially towards the end of the season, it all starts to make sense. Tyrion's history of always falling in love with the wrong woman seems to have extended to yet another one.

Tyrion Is Not Concerned When Jon First Arrives

At first, Tyrion didn't see Jon as a threat, but a friend, and even suggests Dany letting him have whatever he wants. (Ahem.) But why should he worry? Their first meeting almost saw Dany and Jon go to war against each other. At that point, Tyrion's just trying not to lose another potential ally.

The first concern face we get from Tyrion about Jon and Dany is when Dany had dressed him down publicly and then turns to Jon and demands his advice. Of course, Tyrion is mollified for the moment because Jon's advice jives with his own: "You're different because you're not a Mad Queen. You need to stay that way." It when Dany starts caring more about Jon's opinions that Tyrion gets concerned again.

Did the mission "Beyond The Wall" seem weird to anyone else? Oh, only all of Twitter, who asked what sort of harebrained scheme was this, going the Land of Always Winter in this small band and trying to catch a live wight to convince Cersei, of all people, to join the cause.

Who's idea was it again? Tyrion's. When did he suggest it? When Jon wouldn't shut up about the threat from the North, and Dany was starting to get distracted by it. Did he mean Jon not to come back? Well, let's just say he seemed pretty OK with Jon not coming back after that raven turned up.

Dany Rides To The Rescue

Tyrion's reasoning for Dany not going to rescue Jon makes sense on paper. If she dies, the entire fight for Westeros is lost. But it also feels like a desperate plea: stay here, do nothing, let Jon die. Dany's rejection of Tyrion for Jon in that moment is a painful one.

If we put these clues together and see that Tyrion has been pining for Dany, then the sexual jealousy of that final scene all clicks into place. Remember, Tyrion killed Shae because he discovered her in his father's bed. This is not the first time he's been in love with someone, only to see them sleep with someone else. Just the latest and the hardest.

Will Tyrion work to break Jon and Dany up? Especially when it comes to light that Jon is actually Aegon, and a threat to seeing Dany on the Iron Throne? Or will he find it within himself to be the bigger man and let Targaryen incest love take its course?