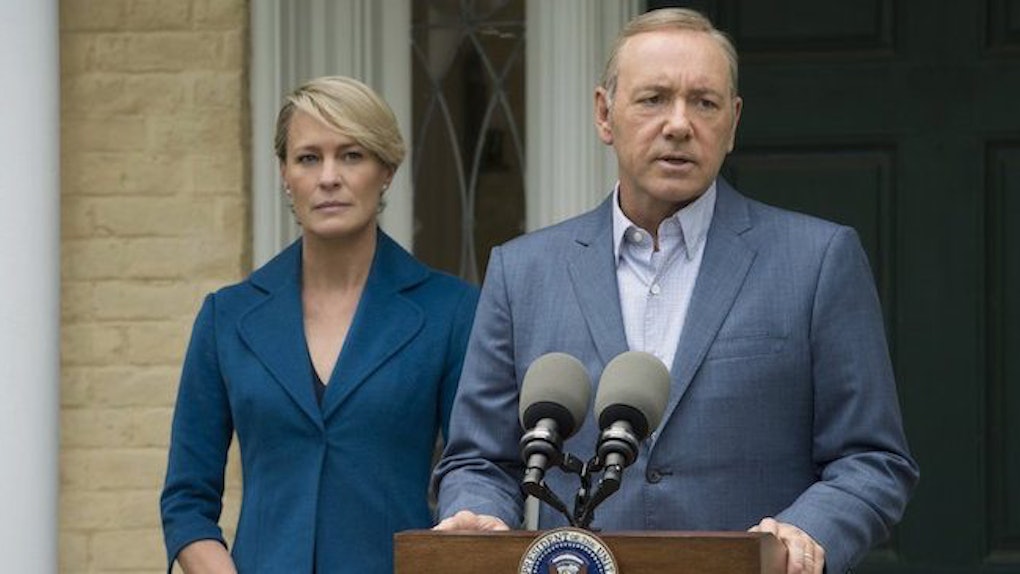 ‘House Of Cards’ Vs. Donald Trump: Cover-ups And Covfefe

House of Cards has always been a hard show to watch, but Season 5 proves to be the most difficult.

No, the storylines filled with murder, extortion, and every immoral act under the sun are nothing new, but how those stories relate to viewers in the current political climate has changed immensely.

The driving force behind Frank Underwood's actions at the beginning of the new season of House of Cards is to distract the American people from an exposé on his past crimes and current shady actions by shouting about a war on terror.

It's a strategy Frank and Claire came up with at the end of last season: to incite terror and chaos in the public in order to hold onto their positions of power.

It's difficult not to feel a sharp pang of familiarity when watching the fictional POTUS employ this method of causing fear as a distraction.

In a jarringly timely move, Donald Trump had all of the American people buzzing about a nonsensical tweet about "covfefe" he posted late on Tuesday night, the same day Netflix released its fifth season of House of Cards.

While all of social media created memes and jokes about "covfefe," CNN revealed Trump is planning on withdrawing from the Paris climate agreement, a major move that will separate the U.S. from nearly every other nation on earth with a denial that climate change exists.

Obviously, the announcement caused uproar online, as Trump knew it would, but that uproar was dampened by the innocuous shouts of "covfefe."

Trump was also fortunate enough to have comedian Kathy Griffin hold up a severed head of him in a photoshoot and wasted no time firing off a tweet about that to further hide his controversial political move.

This inciting of online uproar as distraction has been Trump's go-to move since campaigning. How could we forget how much he loved to remind us about Hillary Clinton's private email server, which became a rallying cry for his supporters even after an FBI investigation found nothing damning in the account.

In the past, watching Frank Underwood manipulate the government, media, and general public with reckless abandon to achieve political omnipotence has been delicious, but now that it's so blatantly leaking into the real world, it's not so easy to swallow.