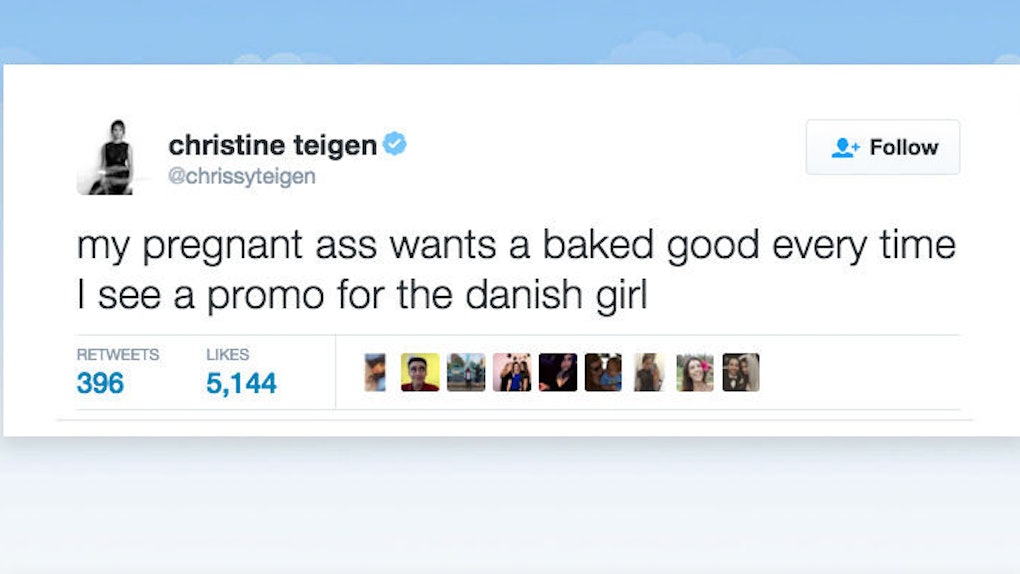 Chrissy Teigen Proves She's The Most Relatable Pregnant Woman Ever

Out of anticipation for Teigen's baby with her husband, John Legend, and a creepy adoration I developed for her after combing through her social media, I am about to do just that.

Over the past few months, the Sports Illustrated model has, like so many women before her, maintained a busy career and fulfilling personal life while also carrying a second human inside of her body.

Rather than avoid commenting on the many ways pregnancy affects daily life, Teigen regularly shares her experiences with the precious miracle that is expectant motherhood.

She debates bringing her belly boarder to da club.

She's shocked by her own pregnancy armpits.

Sexy moves bring her to tears.

I know, I made fun of preggos who hold their bellies too but it's basically the universal language for 'this isn't solely hamburgers.'

She doesn't let anyone tell her how to spend her downtime.

She doesn't need you to compare her baby to anything sold on the side of the road, thanks.

Her breakfast is the kind I have VIVID dreams of weekly.

This is me proudly buying 50 donuts.

Her balance is compromised, but honestly, she's handling it.

She has a sixth sense for all bread-based food...

Her baby shower was cool as hell, even by adult party standards.

She's not returning the "Star Wars" Rey action figure you bought for the baby, but chill.

She knows a healthy baby means a little extra gas.

She maintains her fashion-icon status no matter the cost.

Her pregnancy thighs are still the most enviable legs in the whole damn leg game.

Hello new thighs! You appeared out of nowhere but I am not mad at it!

Pregnant Chrissy Teigen is officially my mentor in a quest to live a happy, healthy, non-pregnant life. And, yeah, that includes a 50-doughnut morning.