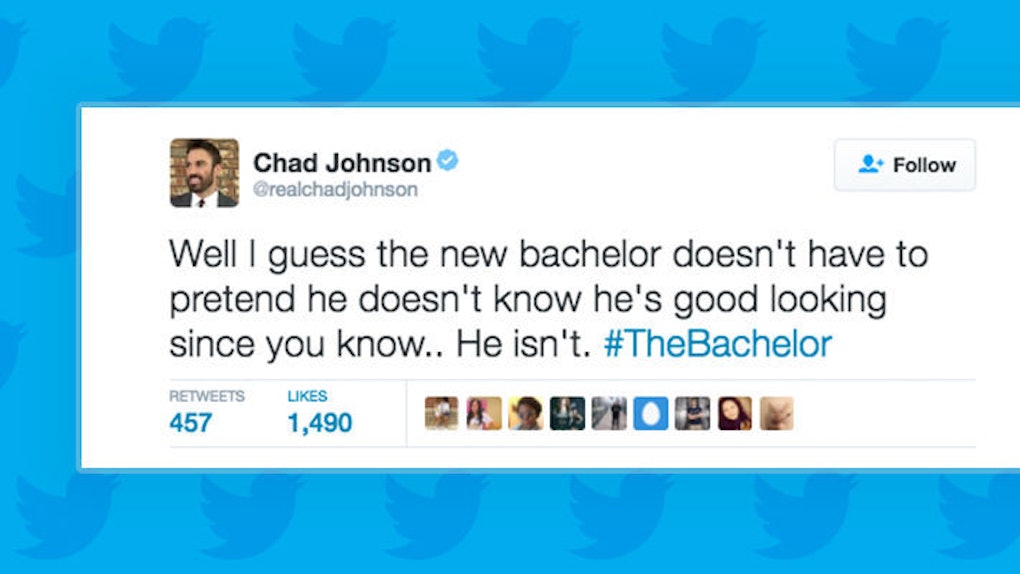 A member of Bachelor Nation is hurting this week and, yeah, it's Chad Johnson.

From this point on, if there's any talk of a BN contestant in emotional distress, just assume it's Chad Johnson.

Even if you're wrong, you're probably right.

These days, Bad Chad can't catch a break, despite being a gentle, romantic poet of a man.

The former "Bachelorette" contestant had some beautiful plans for a future in which he's selected as the next “Bachelor.”

Sadly, Nick Viall of “Bachelor in Paradise” and Andi Dorfman's season of “The Bachelor” was selected as the next series star.

He plans to make himself a season 21 sweetheart regardless of the snub.

And if ANY of you “Bachelor” ladies were thinking of faking it, Bad Chad is here to out your asses.

Chad's investment in ABC's selection is, ultimately, among the least shocking developments of all time. Upon his departure from “Bachelor in Paradise” the luxury real estate agent reminded viewers,

That's not true, Chad. You have 103k Twitter followers and the 15 minutes of fame you received from Satan in exchange for your soul.

Josh Murray even reached out to wish his nemesis the best. JOSH MURRAY, CHAD!

When will your soul finally be at peace?