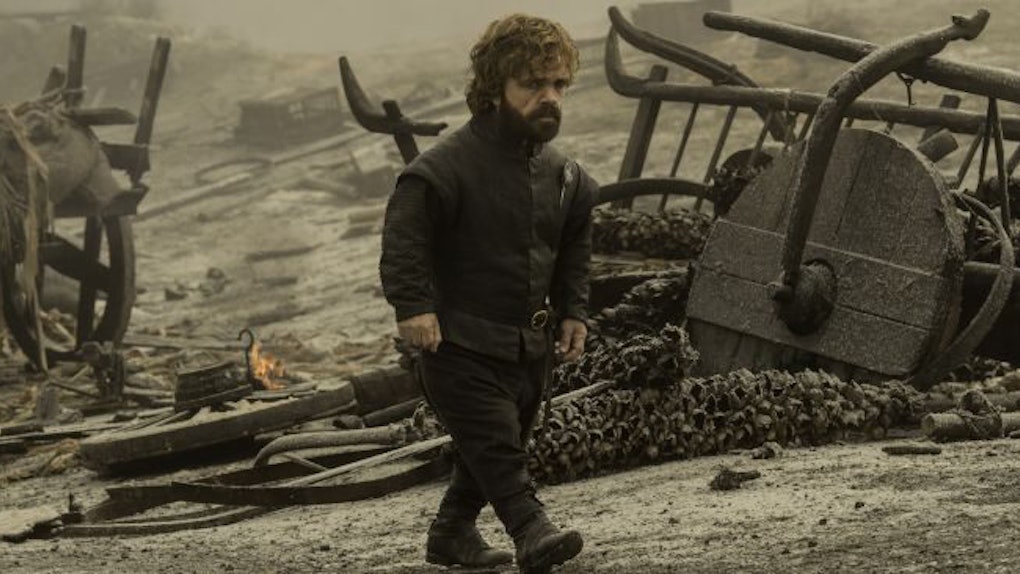 Does Tyrion Kill Cersei On 'Game Of Thrones'? Here's Everything We Know

We've only one more episode of Game of Thrones Season 7, and though the plot is moving faster than ever, no one of any serious importance to the plot has died yet this season. (Sorry Olenna.) That's really out of character for the show, who has had A-list character level deaths every season, save one: Season 2. Fans can't really believe we're going to get away with another season with only minor character deaths, not this close to the end. Current theories rest on Cersei not making it. That brings us back to the prophecy of the valonqar: Does Tyrion kill Cersei?

Well, Cersei certainly thinks so. In the show, it doesn't come through as much, since we're not inside her head seeing things exclusively from her point of view. But ever since Maggy the Frog told her these words, she's feared him:

And when your tears have drowned you, the valonqar shall wrap his hands about your pale white throat and choke the life from you.

Valonqar is High Valyrian for "little brother." Tyrion is Cersei's little brother, and his birth killed her mother, leading her to believe he will be the one to kill her too. (This conveniently ignores that Jaime, born a few minutes after her is also technically her "little brother.")

It doesn't help that Tyrion has threatened her, and in words that actually kind of echo Maggy the Frog's. To be fair, Tyrion actually has no idea about this prophecy. Cersei's never told anyone, except Jaime. If Tyrion knew, he might not have said such things to Cersei, because he would have known the deeper meaning it would have.

Tyrion will be seeing Cersei for the first time since Season 4, where he last saw her smiling from the royal box at him, as his death sentence was passed after Oberyn lost the trial by combat. One assumes he will keep his emotions in check, and merely stand with Daenerys as her Hand.

But will he? Or will he use his chance to prove wrong everyone who has assumed Jaime would kill her this whole time, and do the deed himself?

Somehow, we doubt it. His murder of Tywin and Shae was one of passion, from being pushed past the point of sanity. Cersei may fear Tyrion, and she may wish to be her father. But she'll never have that kind of emotional hold over him the way Tywin did. Most likely Tyrion will walk away, and let nature, Jaime, and the prophecy take its course without him.