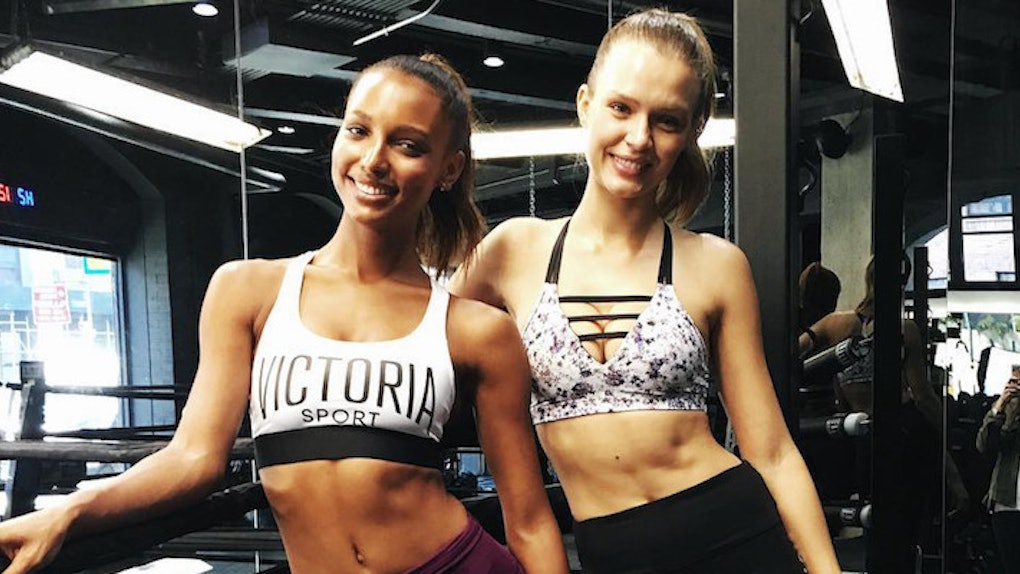 It's that time of year, folks!

You know, it's the time of year when you scroll through your Twitter feed and notice that all of your followers are severely depressed because they can't fathom how a bunch of other humans mastered the art of being beautiful at all times.

I'm obviously referring to the Victoria's Secret Fashion Show, people! It's almost time to watch your favorite VS Angels strut their stuff across the runway.

That's why Angels Jasmine Tookes, 25, and Josephine Skriver, 23, are trading in their sexy lingerie for workout gear.

Did you really think their flawless figures were acquired just... like that? Nope.

It took hard work and dedication, my friends!

Tookes, who was selected to wear the prestigious $3 million "Fantasy Bra" this year, joined Skriver in a new workout video that just might inspire you to get into the best shape of your life.

The two models participated in the Victoria's Secret Train Like an Angel event in New York City on November 2.

The event, which took place at trendy NYC gym The Dogpound, introduced Victoria's Secret fans to a number of different workouts used by Jasmine Tookes and Josephine Skriver.

Workouts included modified pushups, partner sit-ups and jump squats. At one point, they even picked up boxing gloves for a quick sparring session.

Not to mention, the makeup-free Angels showed off some impressive new workout gear ladies are sure to add to their Christmas lists!

Overall, it looks like the VS Angels have a pretty effective workout routine going.

When you're done crying and asking yourself why you can't be totally perfect just like them, you might want to factor these exercises into your existing routine!

The 2016 Victoria's Secret Fashion Show is set to take place in Paris on November 30 and will feature all of your favorite models like Lily Aldrige, Adriana Lima, Alessandra Ambrosio, Elsa Hosk and more.

The official TV broadcast is set for December 5 at 10 pm EST on CBS.

Citations: They gave their lingerie a day off! Victoria's Secret models Josephine Skriver and Jasmine Tookes flaunt their bodies at Train Like An Angel event (Daily Mail)