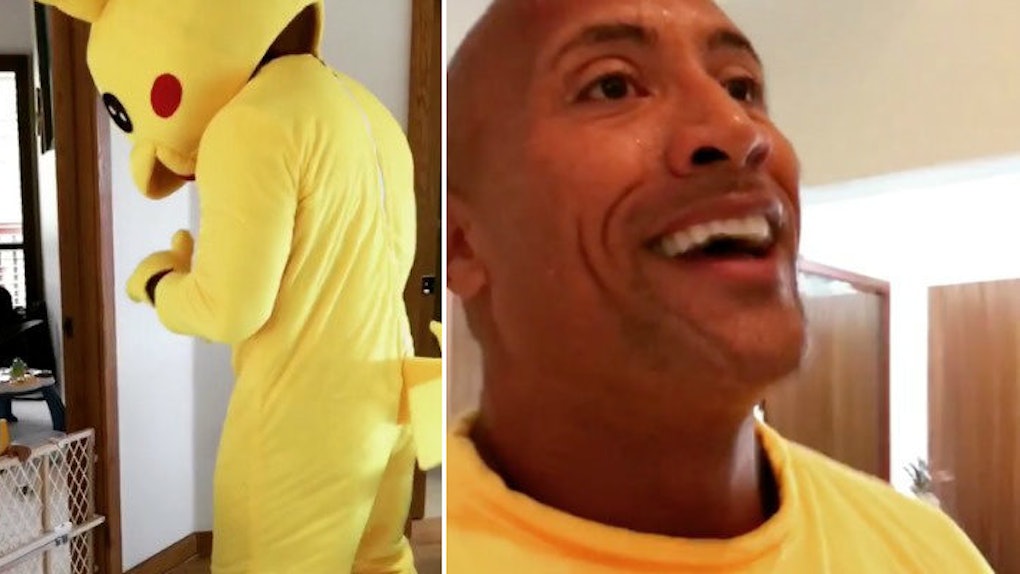 The Rock Surprised His Daughter As Pikachu For Halloween

You could've received all the candy in the world Monday night, and you still wouldn't have had anywhere near as good a Halloween as Dwayne "The Rock" Johnson's 10-month-old daughter.

Jasmine Johnson had the best Halloween ever when her dad, The Rock, dressed up in a giant Pikachu costume and danced to Zay Hilfigerrr and Zayion McCall's "Juju On That Beat," over and over again.

Like, I'm not sure how hot it was in that Pikachu suit, but The Rock was straight-up sweating bullets when he took off his giant Pikachu head to get some air.

Once he did get some air, though, it was right back to work, dancing for baby Jasmine.

So, why would The Rock go through all this trouble for his 10-month-old daughter? Well, aside from the fact he's awesome, The Rock gave a pretty simple reason for his Halloween surprise.

With the sweat pouring from his head, Johnson said,

That's what daddy's do.

The caption that accompanied the video of The Rock dancing for his daughter read,

Pikachu is baby Jasmine's FAVORITE character. So, for Halloween me and @laurenhashianofficial decided the real life Pikachu was gonna come to the house for a visit. What Pikachu didn't know was that Jazzy would start crying when he stopped dancing and demanded he continue to shake his tail with a loud 'EH!'. So, Pikachu danced over.. and over.. and over.. and over... and over.. again. By the time I dropped my 197th JuJu, the heat of this costume was kickin' my ass. But, hey.. that's what daddy's do.

Jasmine Johnson is The Rock's second daughter, and he's clearly enjoying having another baby girl to hold in his arms.

The Rock should serve as an inspiration to young men everywhere. Not only is he a talented and savvy businessmen and a great actor, he's also one hell of a dad.

Citations: Dwayne Johnson Dressed as Pikachu for His Daughter's 1st Halloween and We Agree With Her: He Should Never Stop Dancing (E! News)