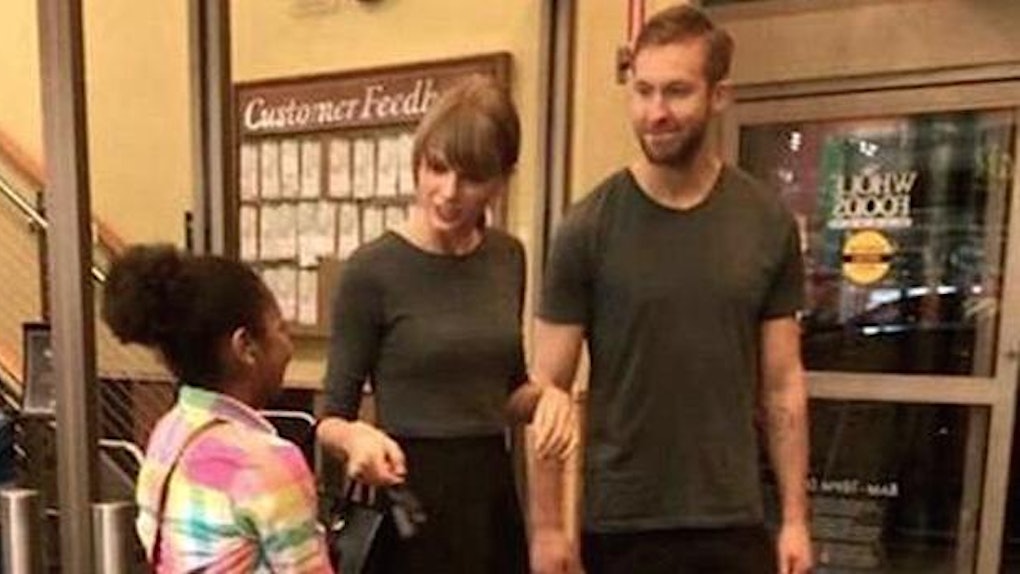 Taylor Swift may have finally filled that blank space in her love life: Rumor has it she's hooking up with none other than Calvin Harris.

Though there's been speculation for a while that the two may be dating, last night they were spotted together — in matching outfits, no less — outside Whole Foods in Nashville, proving they are, in fact, together.

Why is this proof, you may ask?

Thus, this suggests not only are Harris and Swift dating, but they've been dating long enough to buy food together.

Secondly, matching outfits. Weird, but totally indicative of coupledom, if only in that it shows how similar the two are — and that they're comfortable going out in public looking like a pair out of a J.Crew catalog.

And, later that night, the pair (Talvin? Caylor?) went to Kenny Chesney's birthday bash together, where someone snapped a pic of Harris standing with his arm wrapped around Swift's tiny waist.

So, not only did they go grocery shopping together, but they left together, presumably ate a meal together and then went to a concert — together.

If that doesn't spell out “couple,” I don't know what does.

Whether Harris will end up an addition on Swift's long list of ex-lovers, however, remains to be seen.

On March 9, Swift was spotted at Harris' show in Las Vegas.

Yesterday, they went to Whole Foods together.

.@taylorswift13 & @CalvinHarris together in matching outfits...that pretty much means they're going out, yeah!? pic.twitter.com/8KXecnq3An — Tom and Claire (@tomandclaire) March 27, 2015

Then they left together, probably talking about their perfect lives.

After (most likely) making out in Swift's billion dollar penthouse, they showed up to a concert together.

And thus, the most genetically perfect couple ever was born.

i cant believe vincent van gogh came back from the dead to paint this portrait of calvin harris and taylor swift pic.twitter.com/YMLu1HKhZr — danica (@alexachungs_) March 27, 2015

Citations: These Are The First Photos Of Taylor Swift And Calvin Harris Together (Buzzfeed)