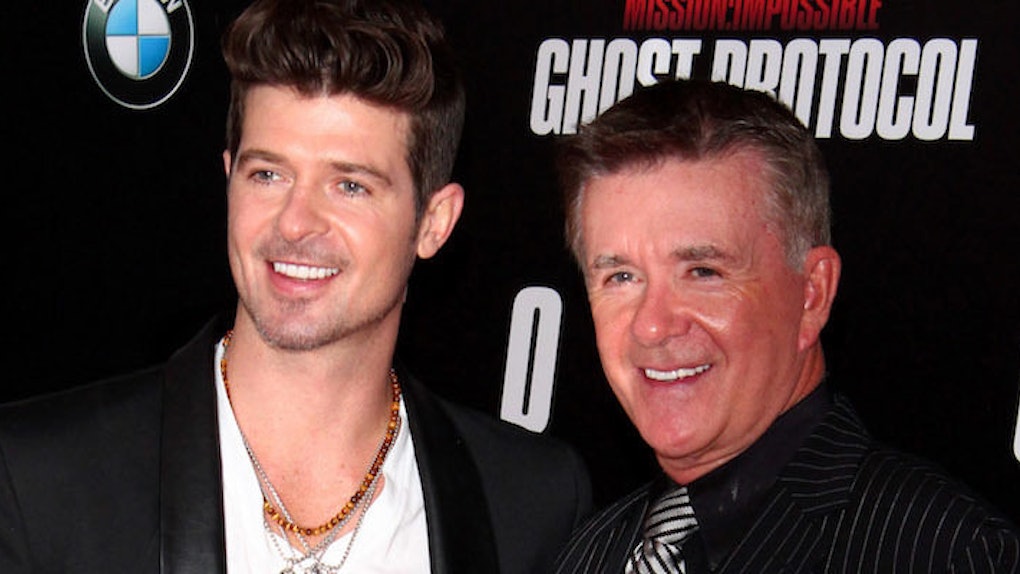 As Robin Thicke is mourning the sudden loss of his father, Alan Thicke, he is grateful they both got closure.

Alan Thicke suffered a heart attack and was pronounced dead at Providence St. Joseph's Medical Center around noon on Tuesday. He was 69 years old.

Late Tuesday night, Robin Thicke posted a tribute to his father on his Instagram page.

My father passed away today. He was the best man I ever knew. The best friend I ever had. Let's all rejoice and celebrate the joy he brought to every room he was in. We love you Alan Thicke. Thank you for your love. Love, your grateful son.

The 39-year-old singer and producer spoke to the Los Angeles Times earlier in the evening, just hours after his father was pronounced dead.

Robin confirmed Alan Thicke died from a heart attack while playing hockey with his son and Robin's half-brother, Carter Thicke.

The "Blurred Lines" singer called his father "the greatest man I ever met" and "always a gentleman."

E! News reports sources close to Robin say the singer is "devastated" and "surrounded by loved ones."

But Robin is taking comfort in the fact that he spoke to his father just a few days before his death.

He told the LA Times,

The good thing was that he was beloved and he had closure. I saw him a few days ago and told him how much I loved and respected him.

Alan's son 19-year-old Carter Thicke, who was with his father when he suffered his heart attack, also posted a tribute to his dad on his Twitter.

Today I lost my best friend and my idol, and the world lost one of it's finest. You are a legend and I love you Pops. Until next time. pic.twitter.com/ZQd2NZMTx4 — Carter Thicke (@CarterThicke) December 14, 2016

Today I lost my best friend and my idol, and the world lost one of [its] finest. You are a legend and I love you Pops. Until next time.

Robin noted when he spoke to the LA Times that some of Alan's last words were to compliment Carter on a nice shot.

Alan Thicke is best known for his role on the '80s sitcom "Growing Pains," where he played the dad, Jason Seaver. https://www.youtube.com/watch?v=te2iIdrm_tk

Hours before his death, Alan sent out a final tweet, praising the newest season of "Fuller House," which he made an appearance in.

Season 2 Fuller House looking good. I even like the ones I'm not in! #fullerhouse @fullhouseguy @bobsaget @candacecbure #netflix — Alan Thicke (@Alan_Thicke) December 13, 2016

Alan is survived by his three sons, Brennan, Robin and Carter, and his wife, Tanya Callau.

All the best to Robin, Carter and the rest of the Thicke family in getting through the grieving process.